Prozac Ocean: Fish Absorb Our Drugs, and Suffer For It 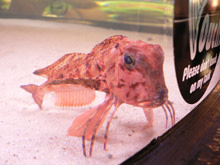 The fish are acting funny because they're on Prozac. In the U.S., more than 200 million prescriptions for antidepressants are given out every year. A lot of the contents of those pills eventually end up in our water supply, either from patients' excretions or from pills flushed down the toilet. Since water treatment plants aren't designed to remove pharmaceuticals, we're effectively medicating our streams and rivers. Chemists have found that water downstream of water treatment plants holds a veritable medicine cabinet worth of antidepressants, including venlafaxine, bupropion (Wellbutrin), citalopram (Celexa), fluoxetine (Prozac) and sertraline (Zoloft). The concentrations of antidepressants in the water—billionths of a gram per liter—aren't enough to affect larger species, but they are enough to make small fish and fish babies feel woozy. Researcher Meghan McGee tested the effect of antidepressants on young minnows by exposing unhatched and newly-hatched minnows to levels of antidepressants commonly found downstream of water treatment plants. The drugged minnows appeared lethargic and took twice as long to react to stimulus, making them much more vulnerable to predators. McGee then upped the dosage of antidepressants to see how they would affect fish that feed on minnows, such as hybrid striped bass. When the concentration was increased to several millionths of a gram per liter, the bass spiraled into a drug-induced haze and exhibited some really weird behavior. Some hung around vertically in their tanks, others skimmed the surface with half of their backs exposed in the air (even though they are normally a bottom-dwelling species). They lost their usually voracious appetites and ignored the minnows that swam around them. The males took on feminine characteristics, loosing their masculine facial bumps and growing yolk protein. In humans, many antidepressants (allegedly) work by altering levels of serotonin in the brain, but some also function like the sex hormone estrogen. It's not clear how the drugs are working in the fish, but it's clear all that Prozac isn't doing them much good. Meanwhile, some communities have begun drug disposal campaigns that collect unused drugs to be incinerated instead of flushed into the water supply. Related Content: DISCOVER: The Serotonin Surprise DISCOVER: Are Antidepressant Drugs Actually Worth Taking? DISCOVER: Antidepressants Trigger Suicide Impulses in Teens