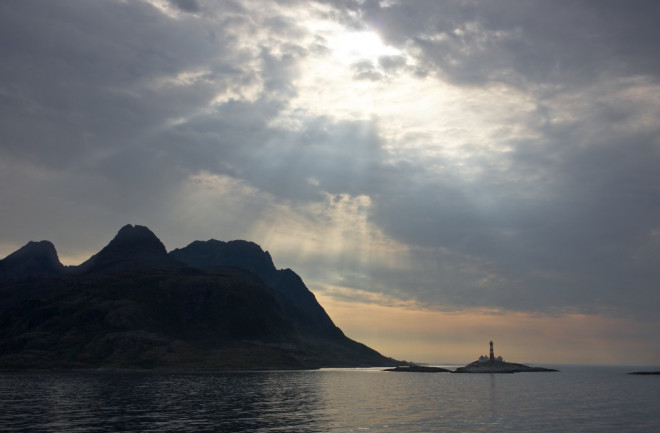 The view from the M/S Lofoten on the journey from Bodø to Svolvaer in Norway, Sept. 8, 2014. Please click to enlarge. (Photo: © Tom Yulsman) Greetings from Norway's spectacular Lofoten Islands, one of the crown jewels of our planet's biodiversity: an environment above the Arctic Circle where coral reefs actually thrive, seabirds by the millions roost, and Orcas, humpbacks, and sperm wales — not to mention humans — feast on teeming stocks of fish. This biodiversity has been described as an Arctic Amazon rainforest and Great Barrier Reef all in one. I'm here to help lead a field trip that's part of a climate change communication course organized by a colleague at Oslo and Akershus University College of Applied Sciences. I'll have more to say about this special place in coming days. In the meantime, I thought I'd post this ImaGeo postcard. I photographed the scene up top as our Hurtigruten ship, the M/S Lofoten, was steaming out into Vestfjorden, a wide bight of water separating the Lofoten archipelago from the Salten district of Norway. (For a map, click here.)

Tommy Edvardsen, Chief Officer of the M/S Lofoten, on the bridge. (Photograph: © Tom Yulsman) The ship, built in 1964, is worth commenting on. She's still got the original engine, which according to the crew may be distinguished in a remarkable way: among engines for which records have been kept, the M/S Lofoten's may well be the longest operating engine on Earth — 300,000 hours in all. Moreover, as she's plied the waters between Bergen in the south and Kirkenes in the north, she's traveled a distance equivalent to the moon and back eight times, according to Tommy Edvardsen, Chief Officer of the ship. (That's him at the helm in the photo at right.) I'm writing this from the town of Svolvaer, where I'll be staying for the next few days while I'm helping with the course. When I get a chance, I'll share some of what I've learned about this remarkable place, along with more photographs. So I hope you'll check back for more.