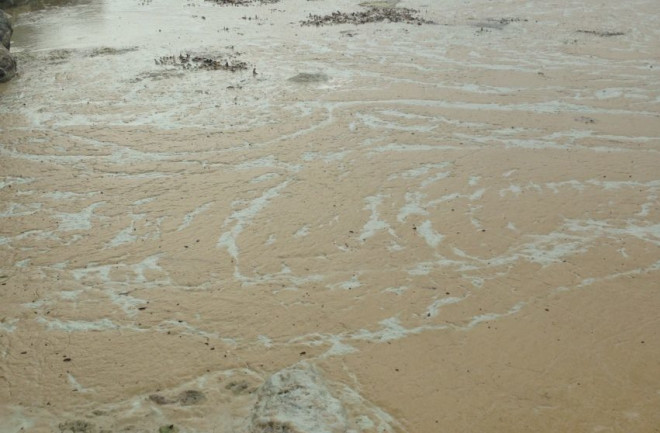 A thick bloom of cyanobacteria, also known as blue-green algae, along the shore at Torö, Sweden, near Stockholm. (Photograph: Courtesy Susanna Baltscheffsky) Summer sun, warm temperatures, and pollution have all combined to brew up an explosion of potentially toxic cyanobacteria, also known as blue-green algae, in the Baltic Sea. You can see the nasty muck up close in the photo above, taken on Sunday by a friend in Torö, Sweden, near Stockholm. On the same day that she posted the picture to Facebook, I spotted a view of the Baltic bloom on NOAA's Environmental Visualization Laboratory web site:

A massive bloom of phytoplankton containing possibly toxic cyanobacteria swirls in the Baltic Sea on July 24, 2014. The image, captured by the VIIRS instrument on the Suomi NPP satellite, shows features not ordinarily apparent in normal visible imagery. (Source: NOAA/NASA) In this image, Sweden is to the left. It was captured on July 24 by the VIIRS instrument on the Suomi NPP satellite. (For a Google map of the region, click here.) Blooms of cyanobacteria can contain different species — including toxic forms that can cause a variety of exceedingly unpleasant effects in humans. The U.S. Environmental Protection Agency says "cyanotoxins" produced by these bacteria can include:

. . . neurotoxins (affect the nervous system), hepatotoxins (affect the liver), and dermatoxins (affect the skin). The presence of high levels of cyanotoxins in recreational water and drinking water may cause a wide range of symptoms in humans . . . including fever, headaches, muscle and joint pain, blisters, stomach cramps, diarrhea, vomiting, mouth ulcers, and allergic reactions. Such effects can occur within minutes to days after exposure. In severe cases, seizures, liver failure, respiratory arrest, and (rarely) death may occur.

I don't know for sure whether the muck swirling in the Baltic now contains it, but it's a good bet.

A form of cyanobacteria known as Tolypothrix. (Photomicrograph: Matthew Parker via Wikimedia Commons) Before I go any further, I should add that the "cyano" in "cyanobacteria" is not at all a reference to the deadly poison cyanide. These single-celled, photosynthesizing bacteria do not produce it. Instead, it is indicative of the cyan — or bluish-green color — of the bacteria. Click on the thumbnail at right for a photo of what one form looks like under the microscope. That said, one of the most common toxins produced by cyanobacteria blooms is Microcystin-LR — and it is actually more toxic than sodium cyanide! Although blooms can be a completely natural phenomenon, we humans have devised a special recipe that seems to cook up big batches of the stuff:

Photograph: courtesy Susanna Baltscheffsky "We usually see some algae bloom every summer," notes my friend Susanna Baltscheffsky, who took this photograph and the one at the top of the post. "It started in the 80's, seldom before." But in her experience, this one "is certainly one of the worse episodes." Cyanobacteria are just one form of phytoplankton. And they aren't the only kind of phytoplankton that form big blooms. Diatoms, dinoflagellates, green algae and coccolithophores also can experience explosive growth in the right conditions. (For more information about phytoplankton, go here.) The Baltic typically sees two phytoplankton blooms each year. The first occurs in the spring and is made up of non-toxic, cold-loving diatoms and dinoflagellates. "These tiny plants spread over the surface of the Baltic Sea when spring's thaw brings a rush of icy-cold water from the land into the sea," according to NASA. The second bloom happens in the summer — with the arrival of the long days and warmer temperatures that help cook up the muck. In a Facebook message, Susanna asked me to emphasize one more thing: "An important point is that the algae bloom every summer, but the winds judge whether they will affect all the people who spend their vacations at the shore or not." To which she added an unhappy emoticon.