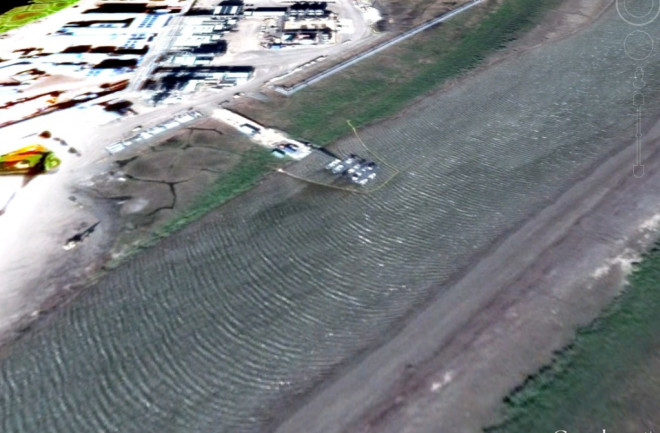 A screenshot from Google Earth of a ConocoPhillips facility in Alaska. Visible in the image is what may be an oil slick, as well as what could be containment booms. (Image: © 2013 Google) I don't think there are many other people who spend their spare time perusing remote sensing images, Google Maps, and the like. I'm one of them, and I may have found a compatriot: climate blogger Michael Cote — who says he has found evidence of an unreported oil spill in the Arctic using Google Maps. He posted a series of Google Maps images showing what appears to be a very small oil spill at a ConocoPhillips facility near the Colville River in Alaska. I decided to have a look on Google Earth — to get a more interesting oblique perspective on the scene. The image at top is what I came up with. Click on it for a larger view, and then look at what appears to be a dock projecting into the waterway. There's a dark stain in the water, as well as a structure that sure looks like a containment boom to me. The ConocoPhillips facility is in the background. It is brighter than the foreground because it consists of another image taken at a different time that was stitched together to make for a continuous scene in Google Earth. In his post, Cote notes that the watermark on the map image is 2013, "so these satellite shots are very recent." I don't think that's right. The terrain is green, so the images were clearly captured in the summer — which was at least six or seven months ago. In any case, it will be interesting to see whether the Alaska Department of Environmental Conservation picks up on this, and what the ultimate outcome will be. Oil spills are not uncommon in drilling operations. But as far as I know, they're supposed to be reported. Did ConocoPhillips try to sweep this one under the rug? I hope we find out. And btw, kudos to Michael Cote for his work on this!