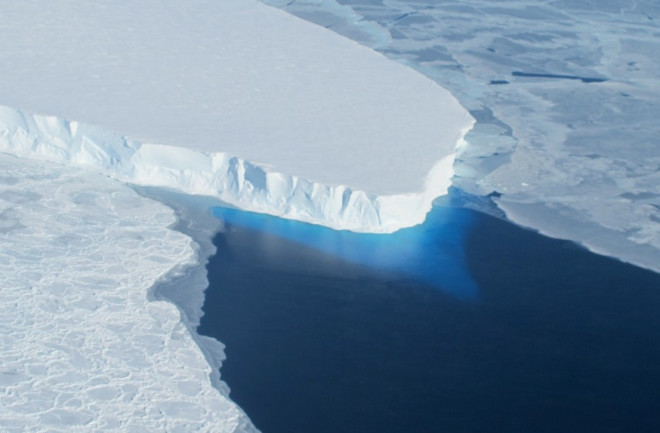 The calving front of Thwaites Ice Shelf in Antarctica. Credit: NASA / Jim Yungel The collapse of a polar ice shelf is one of the most impressive sights on Earth – and for those with an eye on our rising seas, one of the most worrying. And now, new research suggests that the disappearance of these frozen platforms could be even more hazardous than we thought. German climatologists have shown that when an ice shelf collapses, its demise can trigger a chain reaction leading to the collapse of neighboring shelves. This finding challenges our understanding of how ice shelves behave, and could force scientists to increase their projections of future sea level rise.

Ice shelves are floating platforms of sea ice which fringe polar land masses. They help preserve polar ice levels by "buttressing" land-bound glaciers and impeding the flow of ice into the oceans. When ice shelves collapse – an increasingly common occurrence – this flow accelerates, leading to increased ice runoff from the continents and, consequently, a rapid rise in sea level. The collapse of ice shelves was previously thought to be caused primarily by oceanic and atmospheric factors. But recently published research, carried out at the Potsdam Institute for Climate Impact Research, shows that these vital features might be even more fragile than we realized. If, as the research suggests, ice shelves really are sensitive to the collapse of their neighbors, it raises the possibility of a “domino-style” mass-collapse of ice shelves in the future, an event which would have a major impact on sea levels.

Researchers made the find by constructing a computer model of "calving" – the process where chunks break off from the edges of ice shelves. This allowed them to simulate how the collapse of one ice shelf might affect the stability a shelf directly next to it. The model predicted that, when one of the shelves was removed, ice from the surviving shelf would begin to flow sideways into the created void, leading to increased calving and associated shrinkage of the shelf. This has introduced a completely new concept in polar science: "As far as we know, nobody has considered this effect between neighboring ice shelves before", said Torsten Albrecht, who headed the study. Next, to test the physical plausibility of their model, the researchers ran a simulation of the real life collapse of two Antarctic ice shelves – “Larsen A”, which collapsed in 1995, and an adjacent shelf, “Larsen B”, which collapsed just seven years later, after more than 10,000 years of stability. The team tweaked their model to simulate the effect of Larsen A's collapse on Larsen B, to see if the same mechanism of sideways ice flow could explain this dual collapse. The results were both encouraging and alarming. The team’s model predicted that, once the virtual Larsen A shelf was removed, the virtual Larsen B would then collapse, and in much the same way as had actually happened. This strongly suggests that the collapse of Larsen A had in fact caused Larsen B's collapse.

The Larsen B ice shelf - at left, on January 31, 2002, before collapse. By March 7 (right), the shelf disintegrated, leaving thousands of sliver icebergs and a large area of finely divided bits of ice where the shelf had been. (Courtesy NSIDC) This result has potentially serious consequences for predictions of sea level rise. The Intergovernmental Panel on Climate Change (IPCC) believes that the stability – or otherwise – of Antarctica's numerous ice shelves will have a large impact on future sea levels. These shelves were already known to be under threat (parts of Antarctica are amongst the fastest-warming paces on Earth), but the results of the Potsdam model suggest that their situation could be even more precarious. "A number of ice shelves along East Antarctica are interconnected in a similar way [to Larsen A and B]", Albrecht explained. "[Their collapse] could eventually initiate some kind of cascade effect along some crucial portions of the Antarctic coastline."