PLUS: a gallery of other compelling images from the mission 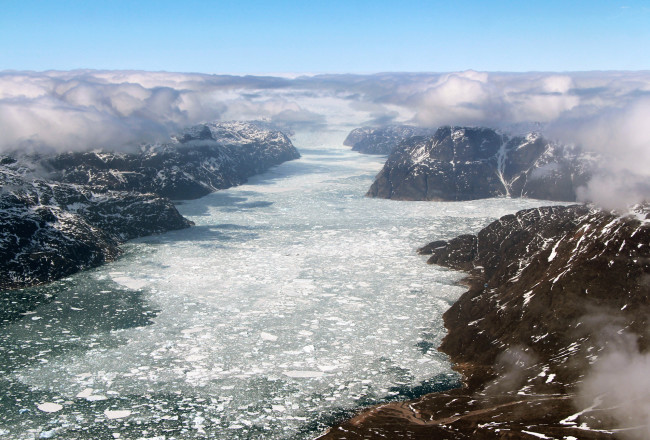 A fjord in southern Greenland, as seen during Operation IceBridge. (Source: NASA/John Sonntag) I'm always looking for cool imagery to use here at ImaGeo, and today I stumbled on this photo. It's of a fjord in southern Greenland, taken during Operation IceBridge's final flight of the 2017 Arctic campaign, on May 12, 2017. Fractured sea ice floats between the towering cliffs, with a glacier visible in the far distance at the head of the fjord. NASA posted the image here today. I've done some modest processing to correct a weird color cast in the original. As NASA puts it:

IceBridge, a six-year NASA mission, is the largest airborne survey of Earth's polar ice ever flown. It will yield an unprecedented three-dimensional view of Arctic and Antarctic ice sheets, ice shelves and sea ice. These flights will provide a yearly, multi-instrument look at the behavior of the rapidly changing features of the Greenland and Antarctic ice.

Here are a few of my other favorite images taken during the multi-year project:

A lenticular cloud appears to hover above pressure ridges in the sea ice near Mount Discovery in Antarctica. (Photograph: Courtesy Michael Studinger/NASA) I originally published the image above back in December of 2013. Shot by Michael Studinger of the IceBridge project, it's a photograph of a phantasmagorical lenticular cloud hovering above the sea ice near Antarctica’s Mt. Discovery. In the middle distance is a jumble of jagged ice — a pressure ridge shoved up by the ever shifting sea ice. 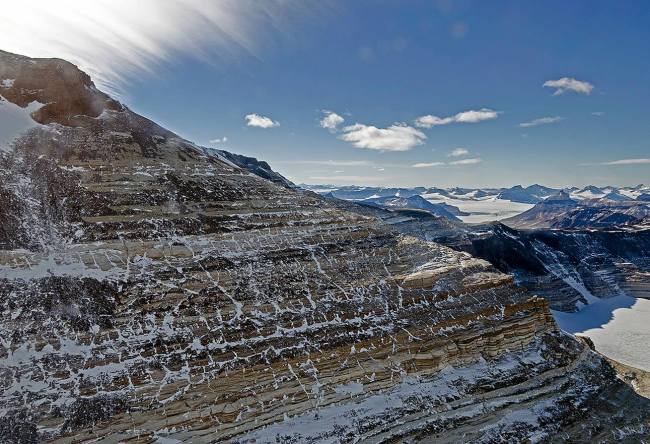 The Transantarctic Mountains. (Source: NASA) This image was photographed from a NASA P-3 airborne laboratory on Nov. 27, 2013, toward the end of the 2013 IceBridge Antarctic campaign. I love the multi-colored horizontal patterning of the rock intersected by snow-filled cracks. 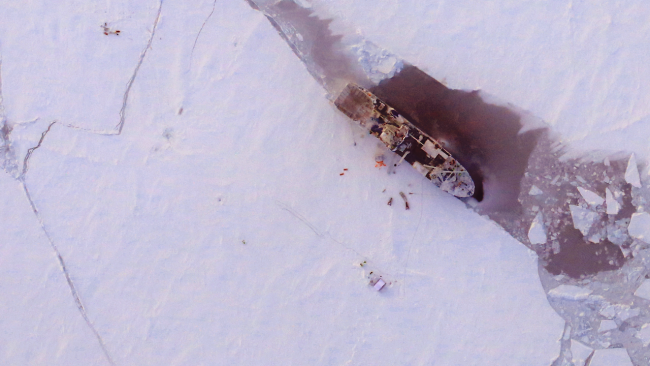 The Norwegian research vessel R/V Lance, photographed during an Operation IceBridge flight on March 19, 2015. Click on the image to watch a video of the overflight. (Source: NASA) Last but definitely not least is this photo of the Lance, a former sealing ship converted into a Norwegian research vessel. The crew of the Lance froze themselves into the Arctic sea ice north of Norway's Svalbard archipelago starting in January of 2015 as part of the N-ICE2015 expedition. They drifted with the ice taking a wide range of scientific measurements until June, when the floe to which they anchored the Lance broke up during the start of the warm season. The photograph was taken on March 19 during an IceBridge overflight. (Click on it for a video.) I have a feature article coming out soon in bioGraphic magazine focusing in part on the adventure of the Lance. When it's published, I'll link to it in a complimentary piece here.