Plastered! Images from space show just how much snow has accumulated in large parts of the U.S. West

Satellite images show how much more snowpack has accumulated in the Sierra Nevada mountains this year compared with last year. (Images: NASA Worldview. Animation: Tom Yulsman What a difference a year makes. After a shocking dearth of snow last year, the Sierra Nevada mountains of California and Nevada truly have been getting plastered, helping to build up the snowpack that millions of people depend on for water. Other parts of the western United States have also benefited from a bounty of precipitation that has eased drought conditions. But does this herald a change in long-term fortunes in the region? Read on to the end for insights about that. First, though, let's focus on the headline-making parade of storms that have marched in from the Pacific. To fully grasp their impact, there's no better perspective than the synoptic one available from space. With that in mind, I created the before-and-after animation of satellite images above. 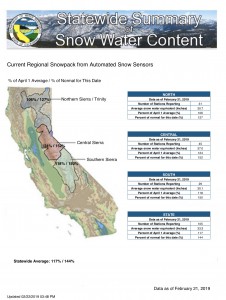 California's snowpack as of Feb. 21, 2019. (Source: State of California Department of Water Resources) It consists of images acquired by NASA's Terra satellite, one on Feb. 21 of last year, and the other captured yesterday — Feb. 22, 2019. The Sierra Nevada range runs vertically, and at a bit of a diagonal, across the middle of the images. The animation speaks for itself. But some hard numbers are also worth considering: At this point in February last year, California's statewide snowpack stood at an almost frightening 25 percent of normal. By comparison, it's now at a hefty 144 percent. In fact, the state's snowpack is already ahead of average for the end of the snow season — and there's still more than a month to go. Many mountainous areas of the interior West are also blanketed in a bounty of snow. In the animation above, look to the north and east of the Sierra Nevada for evidence of that. 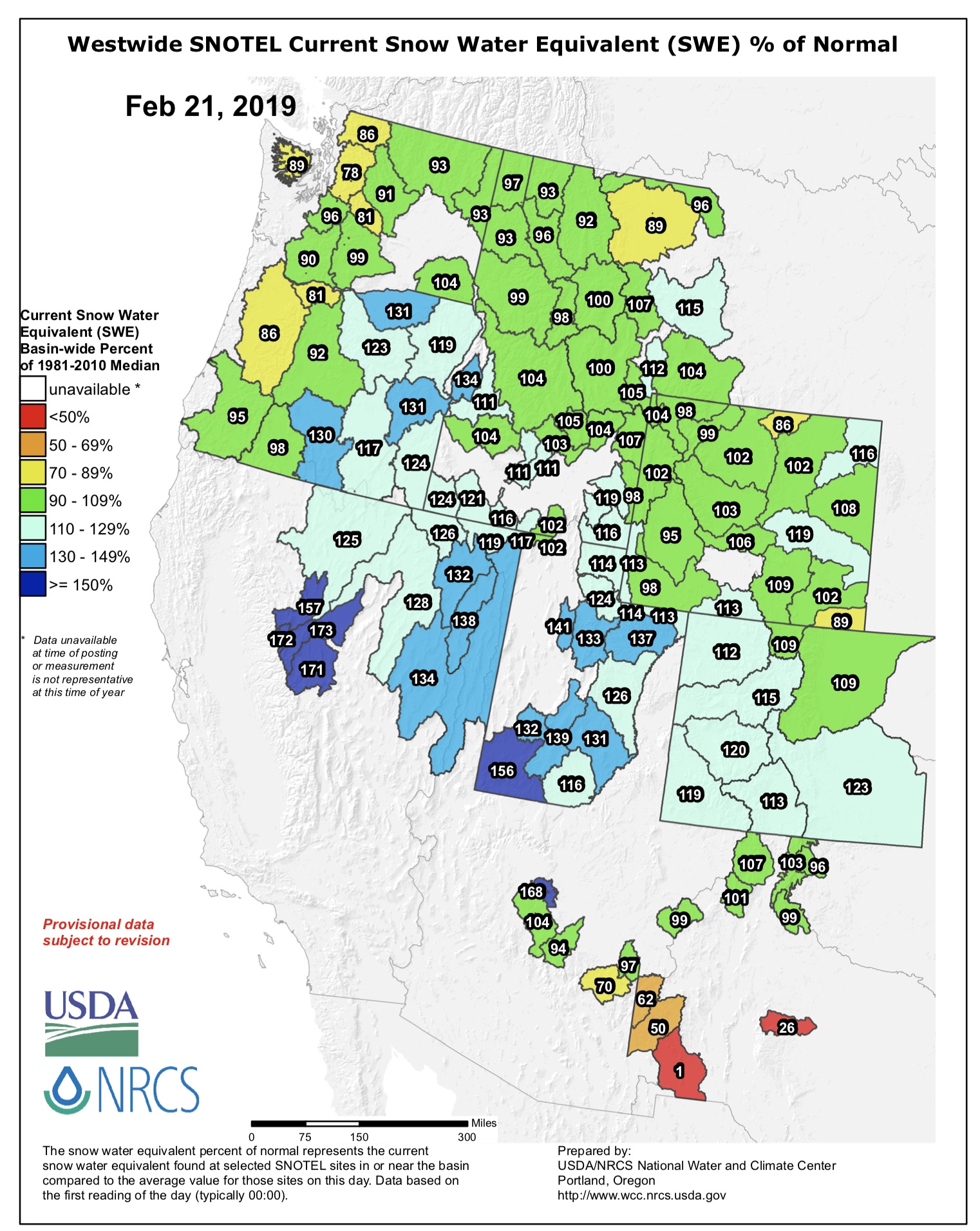 Snowpack conditions in the western United States on Feb. 21, 2019, as determined by the SNOTEL system maintained by the Natural Resources Conservation Service. The map above portrays the mostly happy situation in numbers as well as color-coding. The map is dominated by green, teal, blue and purple colors, indicative of snowpack that ranges from about average to way above average. The map below portrays how precipitation has departed from normal during the period beginning on Oct. 1 of last year, when the winter snow season (also called the "water year") began, up until February 22: 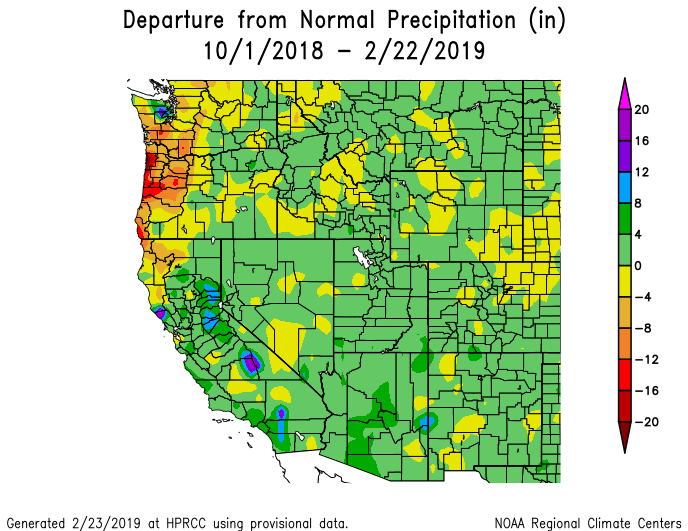 The green, blue and purple colors tell the tell: Most (but not all) of the region has been blessed with normal to above-average precipitation. The recent moisture has nearly erased drought conditions in California. And it has even managed to ease them in the extremely hard-hit southwestern United States. You can see that in this animation comparing drought conditions on Oct. 2, 2018 to Feb. 19 of this year:

Of course, we don't know yet how things will shake out by spring. Wintry deluges could peter out, giving way to stuborrnly persistent warmth and dryness that would partially or even totally erase the precipitation gains made so far this winter, at least for some parts of the West. California's winter of 2016 shows that we should take that possibility seriously. State snowpack in February of that year stood at a healthy 120 percent of average. Yet by the end of the water year on April 1, snowpack had shriveled to 85 percent. We should also keep in mind that over the long term, climate change has been altering the water calculus in the West. Research has shown that winter snowpack today actually results in less water running off into streams and rivers than it did during the last century. This is not primarily because of reduced precipitation. Rather, it's due to a long-term warming trend caused largely by human activities. Warmer temperatures cause more moisture to evaporate from soils. This makes them thirstier, so that they grab and hold onto more water as snow melts, rather than letting it flow into aquifers and streams. Warm, sunny conditions also accelerate sublimation of snow — meaning the frozen water stored in snow's ice crystals transitions directly into water vapor without first melting.

Other long-term climatic factors are at work too, complicating water management in the West, according to Douglas Kenney, Director of the Western Water Policy Program at the University of Colorado's Law School. In many places, "the snow melts weeks before it used to," he says. In Oregon, that melt-out can occur two months earlier. "That changes everything." Some streams just dry up during the summer. Climate change, he says, "is the single biggest water management challenge today." (In the interest of full disclosure, I should mention that Kenney is a colleague of mine at the University of Colorado, where I direct the Center for Environmental Journalism.) We should be grateful for the recent bounty of snow in large parts of the Western United States. But we also need to bear in mind the changing climatic calculus and find ways of making do with less water over the long run.