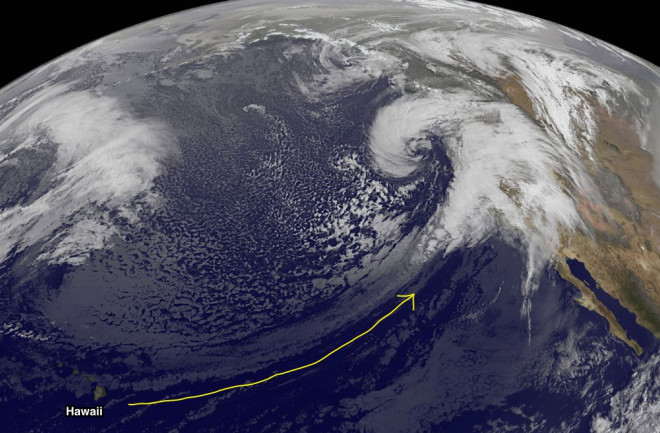 A river of water vapor stretching from Hawaii to California is visible in this GOES-West satellite image. This kind of atmospheric river is often called the "Pineapple Express." (Source: GOES Project Science—NOAA/NASA) The fierce storm now battering Northern California is bringing welcome rain and snow to a state experiencing what may well be its worst drought in 1,200 years. But the storm is also bringing dangerous surf, high winds, and the potential for flooding. We'll see how much of an additional dent this latest blast of moisture, and more rains forecast for Sunday, will make in the drought. Meanwhile, the storm comes just days after a major report from the U.S. National Oceanic and Atmospheric Administration found that "the current drought is not part of a long-term change in California precipitation, which exhibits no appreciable trend since 1895." Instead, natural variability led to a long-lasting atmospheric ridge that has been blocking Pacific storm systems from hitting California.

Source: NOAA That report was criticized for ignoring the role of record-breaking heat between 2012 and 2014 — the warmest three-year period in California history — in exacerbating the drought. In fact, a study published December 3rd in the journal Geophysical Research Letters found that the unusual warmth "could have exacerbated the 2014 drought by approximately 36%." (Click on the thumbnail at right to see the long-term temperature trend.) The blocking ridge of high pressure is nowhere to be seen right now. In Mendocino County north of San Francisco, wind gusts up to 70 miles per hour have been reported this morning, along with power outages. A plume of moisture has been nearly stationary across the region through the nighttime hours, producing heavy rain. More than four inches have fallen in some places north of San Francisco. The Napa River could reach flood stage by late this afternoon, according to the San Francisco Bay Area forecast discussion from the National Weather Service.

An animation of total precipitable water — a measure of water vapor in the atmosphere — shows a classic Pineapple Express aimed at Norther California. (Source: Cooperative Institute for Meteorological Satellite Studies.)

California is on the receiving end of a huge river of atmospheric moisture stretching acrosss the Pacific, from beyond Hawaii. This is a classic "Pineapple Express" phenomenon. Here's an explanation from the National Center for Atmospheric Research:

An informal name for a flow of low- and mid-level moist air, driven by the subtropical jet stream, that sometimes extends from the region around Hawaii (hence "pineapple") to the west coast of the U.S. mainland. This flow pattern often forms when a dip in the jet stream coincides with atmospheric moisture associated with the Madden-Julian Oscillation. The Pineapple Express can last several days, producing very heavy rains across coastal California, Oregon, and Washington. It is slightly more likely to occur when an El Niño is in progress.

A depiction based on numerical modeling of the atmospheric river event, or "Pineapple Express," now bringing heavy precipitation to California. (Source: NOAA/ESRL/PSD)

Here's another view, this one produced by a numerical model. It shows forecast water vapor levels in the atmosphere. (Hawaii can be seen in the lower left corner.)

When it's all over, this may turn out to be "the strongest and wettest storm to hit the region since October 2009 when the last major ‘pineapple express’ soaked the state," according to Christopher C. Burt, weather historian for Weather Underground.

Another shot of moisture, albeit weaker, is forecast to bring "a nice winter soaking" on Sunday, according to the National Weather Service. And the showers are expected "to continue at least through Tuesday, with hints of another weak to moderate storm towards the second half of next week."

Let's hope this is finally the beginning of the end of California's drought.