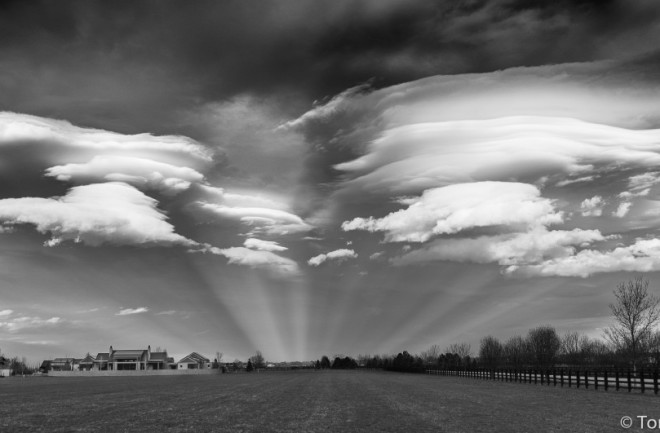 The ominous yet beautiful view looking east from Niwot, Colorado at sunset on March 24th, 2015. (Photo: © Tom Yulsman) The clouds and dramatic light rays that formed at sunset yesterday just east of where I live here in Colorado sure did look like an alien invasion had begun. But the flying saucers were a particularly cool kind of cloud formation that's common in these parts. And those rays? As ominous as they looked in combination with the saucers, they were a spectacular example of a phenomenon known as anticrepuscular rays. More about them in a minute. But first, what about those clouds? They are known as altocumulus standing lenticular clouds. They tend to form when relatively stable, fast-flowing air flows up and over mountains oriented perpendicular to the wind flow, creating standing waves in the atmosphere.

(Source: Albuquerque Center Weather Service Unit) If there is sufficient moisture, clouds will form at the apex of each wave. Click the thumbnail image at right for a schematic illustration of how this happens. (I've written about this phenomenon a number of times — for example, in my second post here at Imageo, as well as here and here.) This phenomenon can result in long parallel bands of clouds, as well as flying-saucer-shaped clouds like the ones I photographed right near my home. For the record, I shot the image with a Fuji X100s (which has a 35mm equivalent fixed lens). I used the Silver Efex Pro 2 plugin for Adobe Lightroom to convert the image to black and white and do some additional processing. As for those crepuscular rays, they tend to occur when clouds and topography partially shade some of the light coming from the Sun. In this case, the photo shows anticrepuscular rays, meaning they are on the opposite side of the sky from the sun. They may look like they are converging at one point, but this is only an illusion. It's caused by the very same perspective effect that makes parallel railroad tracks appear to converge in the distance.

Satellite image of Colorado and parts of surrounding states acquired March 24th, 2015. (Source: NASA Worldview) Back to those clouds... This satellite image shows what the action looked like from above on March 24th. Acquired by NASA's Aqua satellite, the view stretches from the Grand Canyon in the lower left corner to northeastern Colorado in the upper right corner. Note all the roughly parallel bands of clouds in the upper portion of the image. These were formed by standing waves churned up in the atmosphere by the rugged terrain. The Denver-Boulder area where I live is on the plains at the foot of the Rockies toward the upper right. When Aqua passed overhead, not much in the way of lenticular clouds had formed at this point. But look south right along the mountain front and you'll see some interesting cloud formations. https://youtu.be/GmMQ1_xFrIY Lastly, the looping video above shows the evolution of these features over time. You're looking at an animation of GOES weather satellite images spanning much of the afternoon and almost to sunset on March 24th. Colorado takes up most of the frame.