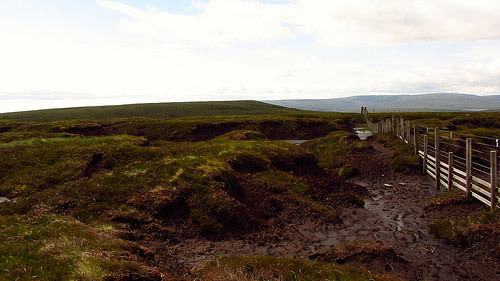 It's a battle over turf---peat, to be exact. In Great Britain, government plans to phase out the use of peat in gardening products---intended to protect bogs, from which peat is harvested---have created a division between gardeners and environmentalists, writes The

of the carbon stored in the world's soil, or more than 200 billion tons of carbon

, but also happen to contain nutrients that make plants grow like gangbusters. Peat bogs are ancient: they are pits of rotted plant matter, particularly Sphagnum moss, that have been accumulating for millions of years. Peat bogs decay so slowly because the oxygen-free environment of the wet bogs along with compounds in the moss's cell walls deter microbes that would otherwise digest them. But harvesting the peat for gardening is depleting the bogs---Alan Knight, head of a task force that is advising the government on how to shift away from using peat in horticulture, told the Times that Britain will run out of peat within decades, while the carbon they sequester will be released into the atmosphere as the preserved organic matter is digested by bacteria activated by the presence of air. The British government is facing resistance from at least some gardeners, though, who cite peat's ability to hold more than its dry weight in water and to increase the soil's grip on nutrients that otherwise just wash away. "If you love your garden, you really can't just abstain," the Times quoted a celebrity organic gardener called Bob Flowerdew

. Flowerdew says that peat is "irreplaceable for cultivating certain hard-to-grow plants and for getting seeds to sprout" and that if need be, he'll take to the black market to get that black soil. Read the rest at The New York Times