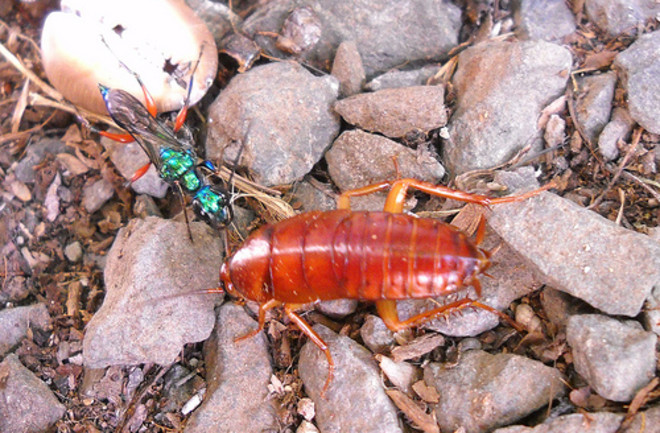 This emerald cockroach wasp (Ampulex compressa) leads a cockroach to its burrow using its own antennae as a leash. The emerald cockroach wasp is a mother on a mission. This parasitic insect lays its eggs on cockroaches, but to minimize the risk of the host's many microbes and pathogens to her eggs, the wasp does what many human mothers today would do. The wasp arms her babies with sanitizer before dropping them off. The iridescent insect, also known as the jewel wasp, has worked out a pretty elaborate scheme to lay her eggs and boost their chances of survival. This newfound sanitation factor, which appeared in a study published in Proceedings of the National Academy of Sciences this week, adds one more step to an already complicated process. First, the wasp stings her selected cockroach's leg so it can't flee. Then it stings the cockroach's brain, injecting a venom to turn off the "run away" response altogether. Next up is the antennae. The wasp uses the cockroach's antennae like a leash to lead it to the wasp's lair. Here the wasp lays a single egg on the cockroach's leg. This is where the sanitizing part comes in. When the egg hatches, the larva secretes a specific combination of mullein and micromolide to soak the cockroach. These antibiotics essentially sanitize the host so the larva can safely eat its organs and then form a cocoon inside its shell. While scientists had found each of these chemicals on the cockroaches before, it is only when used in tandem that the wasp can both kill bacteria on the cockroach and prevent it from becoming resistant to the antibiotics. Moral of the story: if you're going to depend on a cockroach as your nursery, be sure to clean it first! Image courtesy of Jen R / Flickr