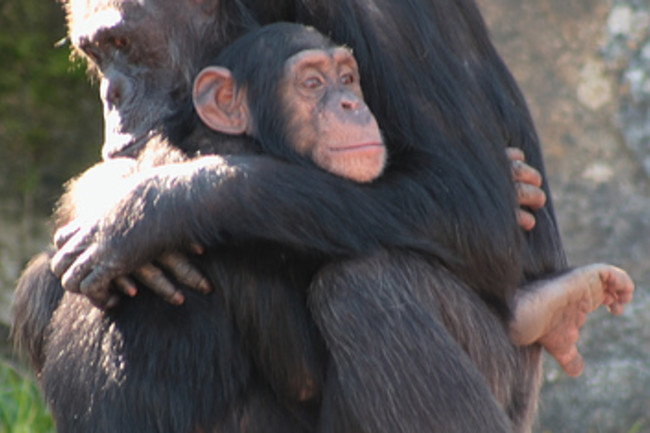 After seven months of deliberation, the US Institute of Medicine has released a report

that marks a turning point in the use of chimpanzees, humanity's closest relative, in medical research. An IOM panel found that chimpanzees were in the vast majority of cases no longer required for disease research and laid out three stringent rules against which all current and future chimp research should be judged. Within two hours, Francis Collins, the head of the National Institutes of Health, announced

he had accepted the group's analysis and would set up a committee to apply the rules to proposed and ongoing research projects funded by the NIH. The recommendation is a reflection of our growing realization that chimps may be capable of self-awareness, empathy

, and happiness, and may possess basic morality

as well as a culture; Brandon Keim, who has covered chimp research extensively for Wired

, notes that some scientists have begun to think they should qualify as nonhuman people

. Subjecting them to disease, pain, and psychological trauma in the service of research thus has grown to seem ethically dubious

, especially after it was revealed that the NIH planned to send 209 chimps who had been allowed to retire from medical research back into the lab

and that an NIH division had illegally bred captive chimpanzees

. At the same time, scientists' increasing skill with using cells in Petri dishes and cheaper, less ethically daunting lab animals like mice in experiments with potential drugs have meant that there are today relatively few research projects for which chimpanzees are the best option. The only projects that the committee believed might have potential need for chimpanzees are those researching vaccines for hepatitis C and a few current projects looking at certain types of antibodies. Accordingly, the IOM has recommended that the NIH approve chimps as research subjects only in cases when no other suitable model is available, when the experiment cannot be performed ethically in humans, and when important progress will be significantly delayed or stopped altogether without the use of chimps. Noninvasive behavioral research in which chimps live in near-natural conditions and comparative genomics work, which usually just requires a blood sample, are not prohibited but will need to meet another set of conditions under the committee's recommendations. All future chimp research projects submitted for funding to the NIH will be assessed according to these criteria, and current publicly funded projects that use chimps, which number roughly 37, will also be reviewed to make sure that they meet the guidelines. Collins told Nature News

that he believes about 50% will wash out under the new rules.