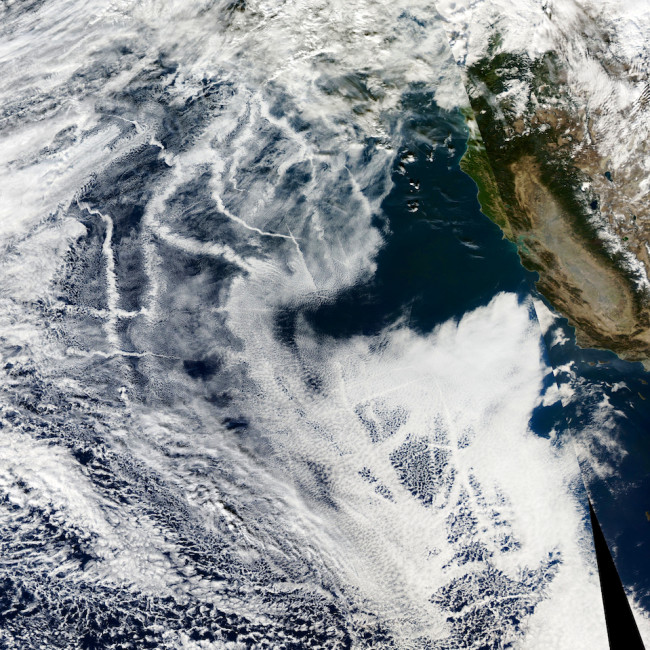 The Pacific Ocean off California, as seen by NASA's Aqua satellite on Dec. 22, 2013. (Source: NASA) They may look like jet contrails, but the crisscross clouds in the image above actually were left by ships making way in the Pacific Ocean off the coast of California. Clouds like this form when little droplets of atmospheric water vapor condense around tiny pollution particles in ship exhaust. These droplets are smaller and more numerous than those in natural clouds, which means there are more surfaces to reflect sunlight. As a result, these cloudy ship tracks are brighter than natural clouds. While the crisscross clouds may look beautiful from space, they are actually indicative of a serious problem. Commercial ships around the world spew nearly half as much particulate pollutants into the air as all the cars in the world, according to research by scientists at the National Oceanic and Atmospheric Administration and the University of Colorado. (For a press release about the research, go here. For the actual paper, click here.) More than 70 percent of ship traffic takes place within 250 miles of the coastline. That concentration of shipping creates health concerns for local coastal cities and towns. 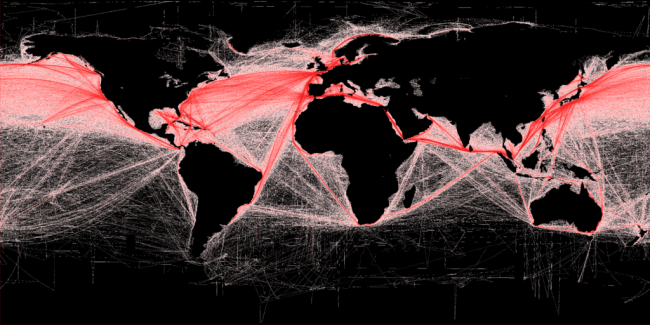 The density of shipping around the globe, with darker reds indicative of more traffic. (Map: Grolltech/Wikimedia Commons) Particulate pollution isn't the only issue. Ships emit about twice as much carbon dioxide into the atmosphere as do airplanes, thereby contributing to global warming. And those emissions could rise significantly in the next decade or so, thanks to growing world trade. For other images of ship tracks as seen from space, check out this post at NASA's Earth Observatory.