Over the Edge: A Pictorial of One of Earth's Natural Wonders 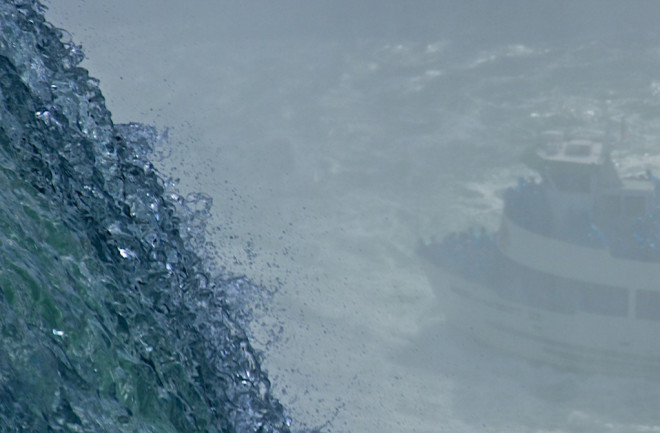 The mist, the Maid, and the reason for both. (Photograph: © Tom Yulsman) About a fifth of the world's fresh surface water resides in the Great Lakes — the legacy of ice sheets that gouged out basins and filled them with meltwater at the end of the last ice age. Over the July 4th holiday, I watched what happens when many millions of cubic feet of that water hurtle at freeway speeds over a precipice and fall more than 100 feet. I'm talking, of course, about Niagara Falls. I've visited the falls dozens of times, and not once have they failed to leave me astonished and humbled. So I thought I would spread the awe with an ImaGeo pictorial of the falls, along with some amazing facts I've garnered about the freshwater system they are part of. It is, in fact, Earth's largest surface freshwater system. Only the polar ice caps contain more fresh water. If all of the Great Lakes' water were spread out over North America, it would cover the entire continent to a depth of more than three feet. I shot the picture at the top of this post from Terrapin Point in New York's Niagara Falls State Park. You're looking at the precipice of the biggest of Niagara's three waterfalls: Horseshoe Falls. In the Niagara River about 180 feet below, the Maid of the Mist shows how she got her name, ferrying tourists into the giant clouds of spray at the base of the falls. More than 6 million cubic feet of water plunge over the edge of Horseshoe Falls every minute when the river is flowing full-throttle during tourist hours. At other times, engineers divert a significant portion of the river's flow to feed hydroelectric turbines that produce more than 50 megawatts of power, enough to supply something like 2 million homes in both Canada and the United States with all the power they need year-round. That power is made possible by water siphoned by the Niagara River from four of the five Great Lakes — Superior, Huron, Michigan and Erie. The river is only 37 miles long. But along that short length, the Niagara falls 326 feet (allowing hydroelectric turbines to convert some of the enormous kinetic energy of the river's flow into electrical energy). Half of the river's drop between lakes Erie and Ontario comes at the falls themselves, where the water moves at speeds approaching 70 miles per hour. From there, the river plunges through a narrow gorge replete with Class 6 rapids. That makes them among the very gnarliest in the world.

Over the edge: the verge of Bridal Veil Falls as seen from Luna Island, with the Maid of the Mist below cruising up the Niagara River toward Horseshoe Falls. Hotels and other buildings loom over the bluffs on the Canadian side of the river. (Photograph: © Tom Yulsman) I took the photograph above from Luna Island. Once again, the Maid of the Mist is visible in the river below, pushing upstream towards Horseshoe Falls. In the foreground you're looking at water dropping over Bridal Veil Falls. Tourists in yellow raincoats are visible on walkways at the base of the falls more than 100 feet down. Notice the green color of the river water? That's not a Photoshop job run amok. It comes from dissolved minerals and very finely ground up rock. An estimated 60 tons of the stuff pour over Niagara Falls every minute. You can see the same green color in this photo too:

A view of the American Falls from Luna Island. (Photograph: © Tom Yulsman) When I shot this one, I was looking back at the American Falls. Part of a bridge to Canada is visible in the upper left corner of the photo. There is one sobering aspect about Niagara Falls that bears mentioning: About 20 to 25 people commit suicide there every year. And the fast moving water above and below the falls claims other lives in occasional accidents. As I'm finishing this post on Sunday, July 7, I've learned that rescuers have been searching the Niagara River for a man and a woman who fell into the water. The woman went over the American Falls at Propect Point. The man slipped into the rapids downstream of the falls at Whirlpool Rapids, where the water rushes through at up to 30 miles per hour. If the weather cooperates, I'll be hiking down to those rapids on Monday. I should have more photos to share, so please check back.