Origins of the Historic Central Great Plains Drought of 2012: Natural Variations in Weather, Not Global Warming 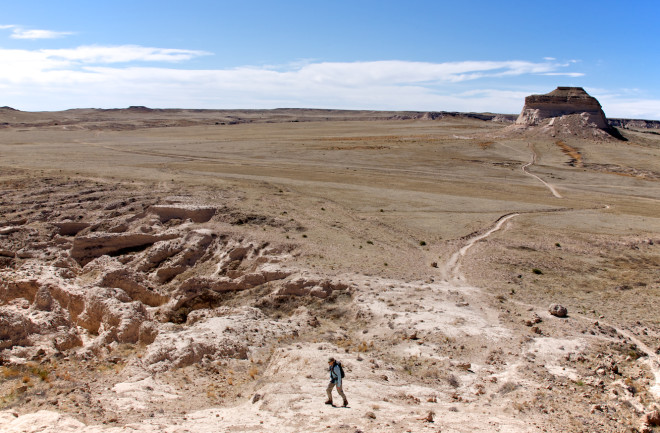 A hiker in the Pawnee National Grasslands of eastern Colorado in March of 2012, just prior to the start of the historic summer drought. NOTE: See updates below with additional graphics and information. As the sere image above suggests, the shortgrass prairie of eastern Colorado is ordinarily a dry place. I shot it on March 17, 2012 out on the Pawnee National Grasslands, a spectacular spot off the beaten path in a state more known for its mountains. As dry as it looks, in March of that year there was no drought there, or even abnormally dry conditions. But in just two months, all of Colorado was in drought, and this spot, along with more than half of the state, was characterized as being in extreme drought. Colorado was not the only state to be hit. From May through August, the entire Central Great Plains of the nation, stretching from Colorado to the Mississippi River, and from Wyoming south through Kansas, experienced the most severe drought since official measurements began in 1895. And it happened so quickly and unexpectedly that it has been called a "flash drought." A report completed in March by a scientific task force of the National Oceanic and Atmospheric Administration, and discussed today at a NOAA press teleconference, concludes that it resulted "mostly from natural variations in weather." From the report's summary:

"That's not to say that climate change isn't happening," says Martin Hoerling, a research meteorologist with NOAA in Boulder, CO, and lead author on the report. "It's just not contributing to this event." The assessment found that the probability of a drought as severe as this one has been four times greater in last decade than 20 year before. "We think due to natural variability," Hoerling says. I pressed to see whether climate change may have had any role in increasing the odds of this event happening. Arun Kumar, development branch chief of NOAA's Climate Prediction Center, and a co-author of the report, responded: "You may be right that climate change is increasing the risk," he said. But whatever the cause, even with the fourfold increase in risk that the researchers found, "it's still very low probability . . . So instead of a one in a thousand chance, maybe it's one in 250," Kumar says. "That's still very unlikely." Most important, focusing on a factor that may have increased the risk by a tiny amount doesn't help in forecasting what might happen, say, this coming summer. That's because the research suggests factors other than human-caused climate change have played a much bigger role. And those are the ones that researchers need to understand the most in order to predict the next flash drought in advance. I may supplement this post with more information and graphics later. But I wanted to get this out there quickly. The updates start here:  This video from NOAA shows the evolution of the drought starting in early 2012: http://www.youtube.com/watch?feature=player_embedded&v=OWBX3QesGnQ#! In assessing the causes of the drought, the researchers used a number of tools, including computer model simulations. The models were fed the actual, observed sea surface temperatures, the atmosphere's content of heat-trapping greenhouse gases, and the changing state of sea ice cover, starting in 1979 and ending in 2012. All of these factors could have influenced the development of the 2012 drought. So the idea was to use the modeling to see whether one or more of these factors might yield something that looked like what actually happened. As it turned out, cycles of sea surface temperature, such as El Niño and La Niña in the Pacific, did not seem to have a significant impact on development of the drought. And neither did the increasing concentrations of greenhouse gases in the atmosphere, or changes in sea ice extent. So the end, it was just "one of those events that comes along once every couple hundreds of years," Hoerling said — the result of weather factors that could not have been predicted. But what about the very high U.S. temperatures in 2012? In fact, the year was the hottest on record for the contiguous United States. Might this factor have contributed to the drought? Speaking during the teleconference, Richard Pulwarty, Director of the National Integrated Drought Information System, noted that climate models do indeed show an increased risk of high temperatures from overall global warming, and "there's no reason to think that this is not happening in the climate system of United States." But it turns out that the dominant control over summer temperatures in the Great Plains is the amount of precipitation that falls. "When it is dry, it gets very hot," Pulwarty said. And this effect is so potent that it may mask any contribution from human-caused global warming. "It's still there, but it's not so easy to see. It's like looking for a tree within a forest of natural variability." Hoerling also pointed out that summers in the Great Plains have actually been relatively cool and wet in recent years — to the extent that the region has been described as a "warming hole". "The classic features of hotter summers have not yet materialized in this warming hole region," he said. At least one climate researcher is taking exception to the conclusions reached in the report. Kevin Trenberth of the National Center for Atmospheric Research told Seth Borenstein of the Associated Press that the researchers failed to take into consideration other climate-change-related factors that could have played a role. "This was natural variability exacerbated by global warming," Trenberth said.