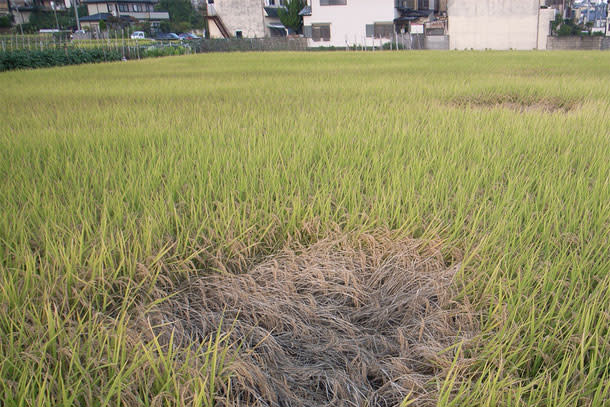 Brown rice. White rice. Sushi. Rice pudding. Rice in all its wonderful forms is the main food source of over three billion people, which makes this statistic all the more ominous: Right now, droughts and floods threaten over 25% of Earth's rice harvests. But that doesn't faze one group of scientists who have discovered that rice evolved to to resist floods also resist droughts. The gene Sub1A, which is found in a few strains of rice, is responsible for this dual flood-drought protection. The researchers who discovered it in 1996 feared that a gene that protects a plant against flooding might make it especially sensitive to drought. So UC--Riverside researcher Julia Bailey-Serres and her colleagues were all the more surprised that the Sub1A gene actually makes rice better at coping with water shortage. This welcome trait became apparent after the water-starved plants grew fresh shoots after the researchers subjected the plants to a mock drought in the lab. So how does a single gene work against both floods and droughts? The gene triggers a stressed plant to go dormant (whether that stress is an overabundance or lack of water) until the environment recovers from that stress. This may seem like an ability of limited use out in the world, but it's actually important for some plants. After water levels go down at the end of a flood, a rice plant that had grown accustomed to soaking in water becomes dehydrated, as if it were suffering through a drought. As strange as it sounds, drought is a natural process in the flooding cycle, and it's this fact that tricks the Sub1A gene into allowing rice plants to become dormant during both floods and droughts, conserving energy for up to two weeks, before reawakening after the waters recede or rain finally returns. This gene for flood tolerance only naturally occurs in certain low-yielding rices in India and Sri Lanka, but scientists have already genetically engineered some high-yielding rice to exhibit this trait---which means that some farmers have also unknowingly been protecting their crops from droughts as well. Related Content: DISCOVER: #49: Plant Migration Tied to Climate Change 80beats: Worsening Drought Threatens Australia's "Food Bowl" 80beats: Global Warming May Make Half the World Hungry by 2100 80beats: More Floods, Droughts, and Hurricanes Predicted for a Warmer World Image: flickr / matsuyuki