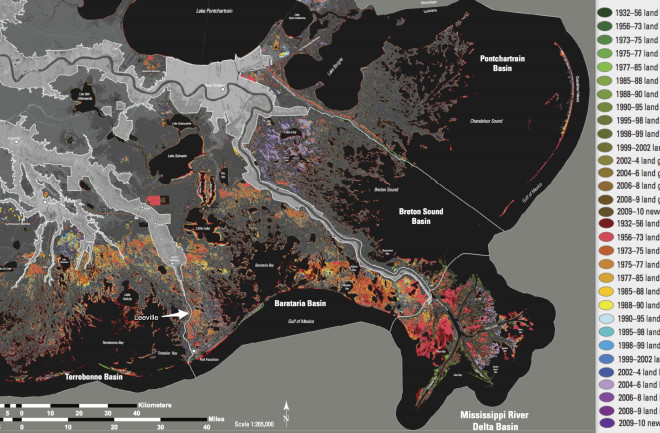 A USGS map from 2011 shows changes in the extent of land area in coastal Louisiana between 1932 and 2010. The report found a net loss of 1,833 square miles. (Click on the image, and see the key at right of the image for details.) An even newer, unreleased report from NOAA suggests that land loss is happening even faster than previously believed. (Map Source: USGS, http://pubs.usgs.gov/sim/3164/) I'm hoping that "Beasts of the Southern Wild" wins all four of the Oscars it has been nominated for, because it is an amazing movie, with incredible actors — and also because it dramatizes the plight of southern Louisiana under the influence of sea level rise. A plight that seems even worse than previously known, thanks to new science uncovered by an enterprising journalist. The plot of the movie involves residents of a mythical Louisiana bayou community known as the "Bathtub." A huge storm is coming, and the Bathtub is outside a protective levee. The heroine, a little girl named "Hushpuppy" (and played by the astonishing Quvenzhané Wallis), finds herself in a Quixotic quest to save her terminally ill father, and the entire community. When he was developing the story, 29-year-old director Benh Zeitlin drew inspiration from the fishing hamlets of Terrebonne Parish, south of New Orleans. It is a place where erosion of wetlands, land subsidence, and sea level rise, have been wiping many square miles of territory right off the map. And now, as we wait to find out whether "Beasts of the Southern Wild" and Quvenzhané Wallis will win any Oscars, a sobering story by Bob Marshall of The Lens, a nonprofit public-interest newsroom based in New Orleans, suggests that the situation in southern Louisiana is much worse than previously believed. From the story:

Stunning new data not yet publicly released shows Louisiana losing its battle with rising seas much more quickly than even the most pessimistic studies have predicted to date. While state officials continue to argue over restoration projects to save the state’s sinking, crumbling coast, top researchers at the National Oceanic and Atmospheric Administration have concluded that Louisiana is in line for the highest rate of sea-level rise “on the planet.”

The problem is known as "relative sea level rise." As the seas come up due to global warming, the land of Southern Louisiana is simultaneously sinking — faster than known before, according to the new, unpublished NOAA report. I highly recommend that you check out Marshall's story in The Lens. It's an excellent example of in-depth, enterprise journalism. One of his take-away messages is that plans for restoring wetlands in southern Louisiana are already out of date.

The percent of each southern Louisiana parish that NOAA projects to be below sea level by 2050 and 2100. (Source: http://lagic.lsu.edu/rsgis/2012/Presentations/osborn.pdf) Marshall's story was accompanied by this graph, showing the portion of the land in southern Louisiana now projected to be below sea level in decades to come. I found it buried in a pdf copy of a presentation by one of his main sources, NOAA's Tim Osborn. There are some stunning numbers there, so take a close look. The news of NOAA's new calculations comes on the heels a 2011 U.S. Geological Survey report, which found that coastal Louisiana had lost 1,883 square miles of land between 1932 and 2010 — an area almost the size of the state of Delaware. (See the map at the top of this post.) From 1985 to 2010, the report found a rate of wetland loss amounting to 16.57 square miles every year. That works out to the loss of an area the size of one football field every hour. Nearly half of that wetland loss occurred in the Terrebonne and Barataria wetland basins. These are home to Terrebonne Parish, source of inspiration to Beasts director Zeitlin, and neighboring Lafourche parish. (The latter was in the news in early January, with reports of cemeteries washing away.) From the 2011 USGS report:

Coastal Louisiana wetlands make up the seventh largest delta on Earth, contain about 37 percent of the estuarine herbaceous marshes in the conterminous United States, and support the largest commercial fishery in the lower 48 States. These wetlands are in peril because Louisiana currently undergoes about 90 percent of the total coastal wetland loss in the continental United States.

Part of the problem comes from damning along the Mississippi, and construction of levees, which prevent sediment from flooding out into the wetlands like they once did. The result: As the mud of the marshes naturally sinks under its own weight, it is not being sufficiently replenished with new sediment. The net effect is subsidence. This is exacerbated by canals dug for oil and gas exploration, which has allowed saltwater to intrude into freshwater marshes and kill them off. The death of the protective marshes, along with subsidence, means the sea is coming up faster than anywhere else on Earth — an impact made even worse by strong hurricanes and other extreme storms in recent years. The 2007 report from the Intergovernmental Panel Report on Climate Change put the global average rate of sea level rise at about 2 millimeters per year over the past century. More recently, research has shown that between 1993 and 2011, sea level actually rose about 60 percent faster than that – at a rate of 3.2 millimeters per year. As temperatures continue to rise under the influence of greenhouse gases from human activities, that rate should increase even more. When that is taken into consideration, researchers expect sea level globally to be about three feet higher in 2100, on average, than today. But along the Louisiana coast, the new, unpublished NOAA report suggests sea level could come up by more than four feet, thanks to the fast rate at which the land is subsiding.