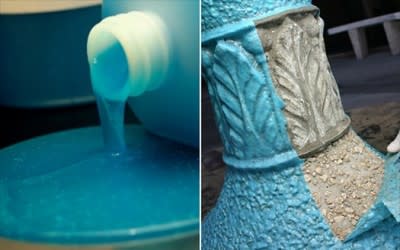 Put away that Swiffer—when you’ve got a real mess to clean up, turn to this blue goo. Japanese officials looking to clean up radioactive contamination are applying a product called DeconGel

to the problem. The usual method is distressingly Stone Age: soap and water applied by human beings. As you can imagine, there are a number of problems with this, like what to do with all that radioactive water, which has a tendency to leak all over the place, and what to do about radiation exposure of said human beings. DeconGel, 100 buckets of which were donated to the relief effort by its manufacturer, CBI Polymers, looks to be a handy way to bypass all that. A radiation-mitigation expert working with Japanese officials put them on to it: "I've been doing this for 20 years,” he says, “and there's nothing comparable to DeconGel out there that I know of today.” (via CNNMoney

) If you’ve ever used a lint roller, you’re familiar with the basic mechanics of DeconGel. The viscous blue goop is poured onto the contaminated surface, allowed to dry, and then peeled off like masking tape from a shag carpet, bringing with it microscopic particles from PCBs to mercury to chromium. (Tellingly, it was a lab accident that put the company on trail of the goo—after an experimental mixture spilled on the floor and was cleaned up, the patch was so clean that no amount of scrubbing could get surrounding floor as pearly white.) The thin leathery material can then be folded or rolled up for storage or further decontamination. It doesn’t actually neutralize radiation, but it makes it significantly easier to cart it away. Of course, what we all really want to know is, unfortunately, proprietary. Step away from the goo with that mass spectrometer, ma’am—its exact chemical make-up is confidential. (via CNNMoney