Off the California Coast, Giant Volcanoes Made of Asphalt 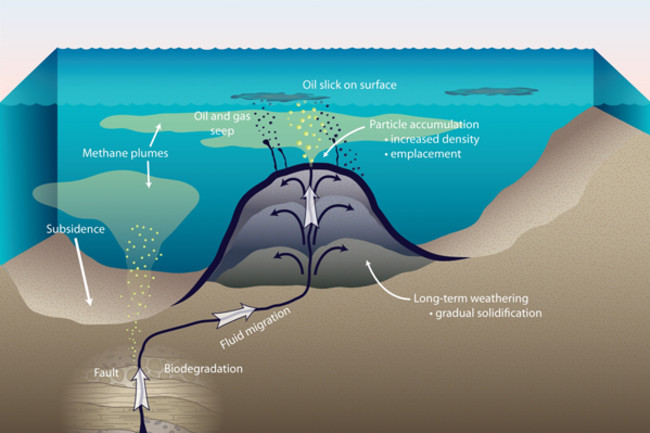 If you thought the toxic bubbling lakes of asphalt DISCOVER covered on Friday were impressive, you ought to see what's under the sea just off the California coast: giant volcanoes made from the same stuff we use to pave our roads. Lead author David Valentine and his colleagues first found these asphalt volcanoes in 2007 when they sent submersible robots to explore peculiar formations 700 feet below the surface. Now, in a study in Nature Geoscience, the team has published its findings and its images of the extinct volcanoes. Valentine says the formations are six stories high, and spread out farther than a football field.

"If I could convert all the asphalt in the largest volcano to gasoline, it would be enough to fuel my Honda Civic for about half a billion miles" [National Geographic]

, he says. Valentine first used the aquatic robot Alvin to explore the volcanoes and take samples; the robot's operators describe the experience as like driving a flat road and suddenly seeing an enormous mountain rise up in front of you. The researchers then deployed the autonomous bot Sentry.

"When you 'fly' Sentry over the seafloor, you can see all of the cracking of the asphalt and flow features," Valentine said. "All the textures are visible of a once-flowing liquid that has solidified in place" [LiveScience] 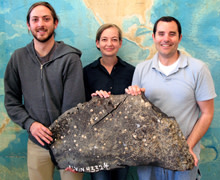 These huge mounds formed 31,000 to 44,000 years ago as petroleum oozed out from the seafloor, the team's chemical analysis suggests. Over time, the petroleum mixed with sand and debris and hardened into domes. There are also depressions around the largest volcanoes that used to be massive vents of methane, the scientists say. They argue that those vents could have contributed to a spike in the level of methane in the ocean about 35,000 years ago, which researchers knew about before this find. If indeed the volcanoes once blasted huge amounts of methane into the sea, then the plethora of methane-eating bacteria, combined with the oil reaching the surface and creating slicks, could have created a dead zone for most life. But that was then. Now, with the methane emissions reduced to a few tiny vents, oceanographer Ian MacDonald says that could be turned on its head: These unusual formations could present an opportunity for marine organisms to thrive.

"I think it's really cool that there's this other process that we didn't really know about before that, at least in some places, is making pretty extensive hard bottoms for animals to colonize" [National Geographic]

. And while the nation's oil and ocean focus is set on the Deepwater Horizon disaster in the Gulf of Mexico, coauthor Chris Reddy said in a statement that the asphalt volcanoes are a reminder not to forget the natural part of the equation. "The volcanoes underscore a little-known fact: Half the oil that enters the coastal environment is from natural oil seeps like the ones off the coast of California." Related Content: 80beats: Do Asphalt-Loving Microbes Point the Way to Life on Titan? 80beats: Sunken Oil Rig Now Leaking Crude; Robots Head to the Rescue 80beats: Obama Proposes Oil & Gas Drilling in Vast Swaths of U.S. Waters 80beats: 21 Years After Spill, Exxon Valdez Oil Is *Still* Stuck in Alaska’s Beaches Images: Jack Cook, WHOI; George Foulsham, UCSB