October in a Tie As Warmest on Record. But What About that Global Warming Hiatus?

The weekly evolution of sea surface temperatures is seen in this animation of images from the start of 2014 through the week of November 5th. (Maps: NOAA. Animated gif: Tom Yulsman) It seems that 2014 is still very much on track to be the warmest year on record. On Friday, NASA released data showing that this past October tied with 2005 as the warmest in a record stretching back to 1880. This follows record breaking warmth in September and August. 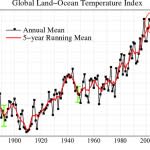 (Source: NASA GISS) Even so, Earth's average temperature isn't rising as fast as it once did, prompting scientists to search for explanations of this so-called global warming hiatus. (Click the thumbnail at right and look at the circled area to see what that looks like in graph form.) Politicians continue to exploit the slow-down for partisan purposes. As Sen. James Inhofe of Oklahoma, the incoming chairman of the Environment and Public Works Committee, said recently:

"While some Democrats may be convinced that global warming is continuing to occur, the scientific record does not agree . . . In fact, for the past 15 years, temperatures have not increased."

He conveniently ignores the fact that each of the last three decades has been successively warmer at the Earth’s surface than any preceding decade since 1850, according to the Intergovernmental Panel on Climate Change. In the Northern Hemisphere, 1983–2012 was likely the warmest 30-year period of the last 1400 years. And if that's not warm enough for you — despite the Arctic cold that has lately plunged across part of the United States — all of the 10 warmest years on record have occurred since 1998. Even so, what's causing the slowdown? You can read more about that in a story I wrote for Discover's upcoming Year in Science issue. So look for that. But after that issue of the magazine was put to bed, new findings have rolled in, so I thought I'd share them with you here. The possible explanations for the slowdown include a decrease in solar activity, more blocking of sunlight from aerosol pollution, and large amounts of heat being stored deep in the oceans, far from where it can help warm the air. In my Year-in-Science story, I write about a theory advanced by Kevin Trenberth of the National Center for Atmospheric Research and colleagues. They argue that heat plunging into the depths of the Pacific Ocean is the key factor. As that has occurred, the surface waters of the tropical Pacific have cooled. (I italicized 'tropical' for reasons that will become clear shortly.) And this, in turn, Trenberth and his colleagues say, has triggered changes to atmospheric and ocean circulation that have ultimately led to heat also plunging into the Atlantic Ocean and polar regions as well. A new study by Sybren Drijfhout of the UK's University of Southampton points to heat sinking into the Atlantic and Indian Oceans, and the waters near Antarctica, as the main driver. As Puneet Kollipara describes this research in an article at Science:

Armed with a unique model that simulates the world’s oceans using historical weather data on temperature, humidity, and wind, Drijfhout and his colleagues calculated how much heat is moving between the oceans and the atmosphere, as well as where it first enters the ocean. The model revealed that the oceans were trapping more than 80% of the missing heat. But the change in sea surface temperatures in the tropical Pacific could account for only 30% of the extra ocean heat uptake. The other 70% was split between the Atlantic Ocean, Indian Ocean, and waters just off Antarctica, Drijfhout and his team reported online this month in Geophysical Research Letters. That suggests that the Pacific isn’t single-handedly running the show after all.

Either way, the oceans are obviously part of planet Earth, so it seems clear that global warming has been continuing — mostly deep in the oceans. And as the animation at the top of this post suggests, it is possible that the surface of the oceans could be starting to catch up. The animation shows how the temperature of the sea surface worldwide varied from the long-term average, week-by-week beginning on January 1st of this year and up until the week of November 5th. Keep a close eye on the northern Pacific, from offshore of California up to Alaska. Note that big splotch of orange, red, and magenta — that's a huge amount of surface warming. The global mean sea surface temperature this past summer was the highest on record, according to Axel Timmermann, a climate scientist at the University of Hawaii, Mānoa, quoted in a press release here. "The 2014 global ocean warming is mostly due to the North Pacific, which has warmed far beyond any recorded value . . . and has shifted hurricane tracks, weakened trade winds, and produced coral bleaching in the Hawaiian Islands." It's way too soon to say whether this is the start of a trend. But if it is, the ocean depths may be getting ready to give back some of the heat they've been banking. And if that happens, I wonder what Sen. Inhofe will say. Actually, I take that back. Who cares?