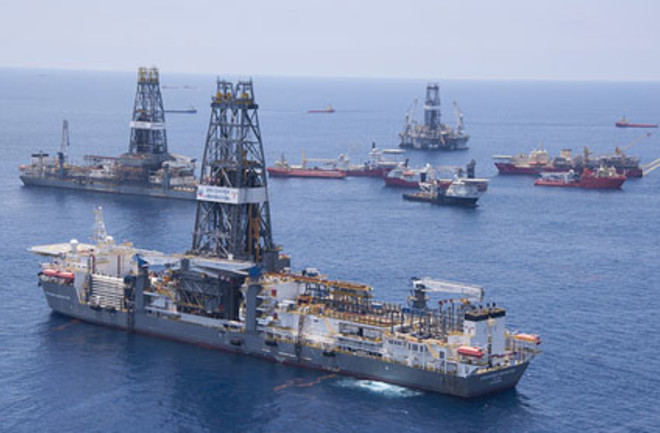 On Tuesday the U.S. government repealed the six-month ban on deep-water drilling in the Gulf of Mexico, enacted in May in response to BP's Deepwater Horizon oil spill.

"We are open for business," Interior Secretary Ken Salazar told reporters in a phone call Tuesday afternoon, adding, "We have made, and continue to make, significant progress in reducing the risks associated with deep-water drilling." [The Washington Post].

The ban was supposed to be lifted on November 30th, but the government lifted it a few weeks early under pressure from Gulf Coast lawmakers. The drilling halt was deeply unpopular in the Gulf states where up to 12,000 jobs were temporarily lost (though some experts number

the jobs directly and indirectly lost by the moratorium at around 175,000). Drilling won't resume immediately. The Obama administration has issued strict new operating and safety rules, and each offshore rig will need to pass inspection before it can resume work. The first permits allowing drilling will likely be issued before the new year. Says Michael Bromwich, director of the new Bureau of Ocean Energy Management, Regulation and Enforcement

"We'll be inspecting in a very careful and comprehensive way those rigs to make sure they're compliant with the new rules," Bromwich said.... "We won't know [if they're compliant] until we begin to do those inspections." [The Washington Post].

Even with the moratorium lifted, the additional regulations will still have an impact on how oil companies do business in the Gulf. The Bureau of Ocean Energy Management has estimated

that the new regulations will cost about $183 million a year. Bernard Duroc-Danner, an executive of Weatherford, which makes parts for offshore drilling, warned that the increased cost of the drilling operation could cause big changes.

"It is likely that there will be ownership shifts. A fair amount of properties over time will find themselves on the auction block in the Gulf of Mexico," he said. "What will happen to deepwater in general is that it will take more time, it will be more expensive, and will yield less at a later time." [The Telegraph].

During the time of the ban 33 deep-water rigs were sitting idle in the gulf, five of which eventually moved on to drill in Egypt and Africa. BP stated on Wednesday that it is not ready to discuss its future plans for drilling in the Gulf, but it is likely the company will restart operations and maintain a strong presence in the area. The response to the Obama administration's announcement has spanned the spectrum. Pro-oilers are excited by the move, but fear that delays in the permitting process will cause a de facto moratorium. Environmentalist groups are disappointed by the early return to deep-water drilling, and say we don't yet fully understand what caused BP's disastrous spill

"Today's actions are premature," said Peter Lehner, executive director of the Natural Resources Defense Council. "To ensure a disaster like this never happens again, we must know what caused it in the first place. We're still waiting for that answer." [The Washington Post].

But many workers on the Gulf Coast are feeling relief at the news that work might pick up soon.

Chris Moran, who runs a motel, restaurant and convenience store in Port Fourchon, La., said that the news had prompted happy rumors about which companies would start work first, and how many people they might hire.... Now, he said, "I'll be able to live my life without [having] to think about a career change." [The Washington Post].

80beats: 5 Offshore Oil Hotspots Beyond the Gulf That Could Boom–or Go Boom