Now You Can Trash Your Credit Guilt-Free, Thanks to Biodegradable Credit Cards 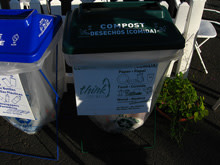 As if there isn't enough economic incentive to dispense with credit cards these days, a new card issued by Discover Financial Services [ed. note: no relation to DISCOVER, though they own Discover.com] now adds an environmental perk as well. A new biodegradable credit card, released in December, will break down when exposed to microorganisms into carbon dioxide, water, and a mild salt. The New York Times reports that the card is made of biodegradable polyvinyl chloride, or PVC, and bears the same durability as a traditional plastic credit card. Yet it will decompose in a microorganism-filled environment, which the company says can be just about anywhere, including water, soil, a compost heap, or even a landfill, because the microbes operate anaerobically. With 1.5 billion credit cards in use in the U.S. as of 2006, the ability to decompose will surely ease the burden on landfills, which have their fair share of other plastic to deal with. The trick behind the card is a secret that BIOPVC, the company that created it, will not give up, but they say no toxic PVC remains once the microbes break down the plastic. A Columbia University professor took a stab at how the process works, and said it can be activated by coating PVC with a material that attracts fungi, or alternatively one that attracts rather than repels water, which contains microbes that will then break down the PVC. This could come in real handy at a time when we should all perhaps be throwing out credit cards, dangerous and debt-inviting as they are. Related Content: 80beats: Plastic-Devouring Bacteria Could Keep Soda Bottles Out of Landfills Disco: Save the Planet: Dissolve Your Dead

EnvironmentFood Waste Is a Serious Problem. Here Are 9 Ways to Throw Away Less Food
Recommendations From Our Store