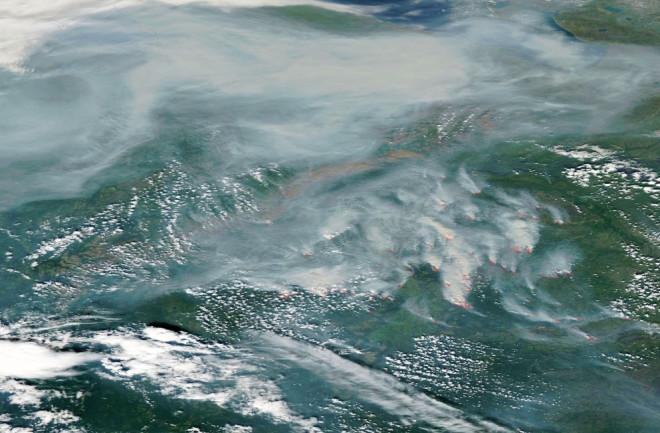 Smoke from multiple fires can be seen in this image of Siberia near the town of Salekhard captured by NASA's Terra satellite on July 27th, 2013. Each red dot represents an area where the satellite detected fire. (Image: NASA) Maybe you've heard that the North Pole has melted? Well, it hasn't, despite claims to the contrary. But to the south in Siberia, near-record-breaking heat grips the region, wildfires are burning, and smoke is spreading over thousands of square miles The image above, captured by NASA's Terra satellite yesterday (July 27), shows multiple wildfires burning. Each red pixel in the image indicates that the satellite detected a fire at that spot. The nearest town as best as I can determine is Salekhard. And my rough estimate is that the smoke you see in the image covers an area at least 200 miles on a side. Click here for a map of the area. If I'm right about the smoke coverage, we're talking 40,000 square miles. And that's only one part of Siberia. Here's a broader view — almost 1,000 miles across— captured by Terra today:

A swath of Siberia a little less than 1,000 miles across, as captured by NASA's Terra satellite on July 28th, 2013, shows extensive areas of smoke from wildfires. Each red dot represents an area where the satellite detected fire. Click on the image for a larger, zoomable view. (Image: NASA) Of course the fires themselves cover much less territory than the smoke. How much, though, is a difficult to determine. I've found only one account of what may be happening, an article in an online publication called Russia Beyond the Headlines. They quote regional forestry officials as saying that 57 forest fires were burning across 1,919 hectares, or 7.4 square miles, in Siberia as of last Friday. That seems like an underestimate to me. I could easily be wrong, but the photo suggests to me that more than 7.4 square miles are ablaze. Last summer, Siberia experienced its worst wildfire season in more than a decade. And it appears to be part of a long-term trend of increasing fire in the northern parts of the globe, including boreal forests. The most recent evidence of this trend was published in a study appearing in the July 22 issue of the Proceedings of the National Academy of Sciences. The research shows that wildfire activity in a region of boreal forest in Alaska is higher than at any other time in 10,000 years. For more than a week, Salekhard and other parts of Siberia, such as Noril'sk to the northwest, have been baking under extremely high temperatures. The average high for Salekhard in July is 67 degrees, according to Weatherbase. On July 24, temperatures soared to 89. And daily high temperatures have been in the mid to high 80s for a week. Writing at Wunderground.com, weather historian Christopher C. Burt reports:

The extraordinary and perhaps unprecedented heat wave continues in the central arctic region of Russia. Some locations have now endured 10 consecutive days above 30°C (86°F).

It remains unclear whether or not any all-time records have been broken at any sites in Russia the past few weeks or if these are the highest temperatures ever observed at so northerly a latitude.

Check out the rest of his extensive post here. Over the long run, the Arctic region has been warming at twice the rate as any other region on Earth — one of the clearest symptoms of human-caused global warming. There's also scientific evidence that parts of the subarctic (Salekhard is just below the Arctic Circle) are warming rapidly as well. (For example, see this study of the Swedish subarctic.) Salekhard certainly has not escaped the long-term warming trend. I created this graph of temperatures there using data from the Goddard Institute of Space Studies:

The gray line shows the annual mean temperature for June-July-August at Salekhard, Russia. The red line shows the linear trend, and the black line depicts the five-year running mean. (Data: GISTEMP/Goddard Institute for Space Studies) It will be interesting to see how things shape up over then next couple of weeks.