North of Drought-Plagued California, Snowpack in the Cascades is at Record Lows Too

An animation of satellite images acquired in spring shows diminishing snowpack in the Cascade mountain range of Oregon between 2013 and 2015. (Images: NASA Worldview. Animation: Tom Yulsman) The news out of California this past Wednesday was so grim that it once again grabbed headlines away from another region that is suffering too. Following Wednesday's news that snowpack in California's Sierra Nevada range is virtually gone, today the U.S. Natural Resources Conservation Service announced that snowpack in the Cascades of Oregon and Washington is also at record lows. You can watch it pretty much vanish year to year in the animation above. I created it using three images acquired by NASA's Aqua and Terra satellites. The sequence starts on March 30, 2013, moves to April 7, 2014, and concludes with an image acquired this past March 26th. The main culprit here has not been primarily a lack of precipitation, which was only a little lower than normal in Oregon. As has been the case in California (which experienced low precipitation this winter but not record low), and elsewhere in the western United States as well, snowpack in the Cascades has taken a really big hit from exceedingly warm temperatures.

"It has been a very, very warm winter – almost historically so," says Philip Mote, director of the Oregon Climate Change Research Institute at Oregon State University, quoted in an OSU press release. “On one hand, the warm temperatures have made for a rather pleasant winter. On the other hand, the snowpack situation has been atrocious, and that really raises concerns for water levels in many streams later this summer." There's a connection here to global warming. As Andrew Freedman writes in Mashable:

We are now seeing the rise of a new, supercharged type of drought, in which global warming-related temperature extremes combine with dry conditions to transform what would otherwise be an ordinary drought event into a far more severe event. 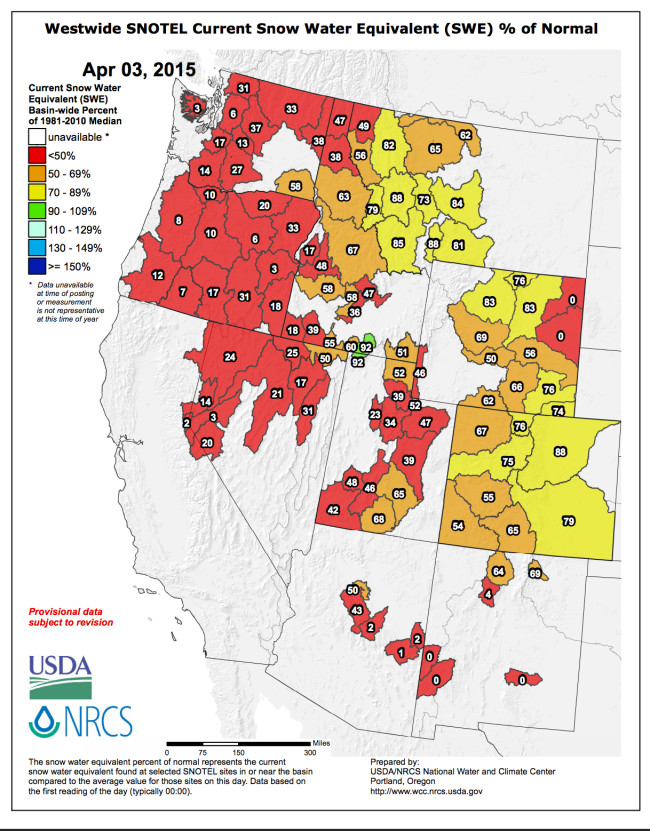 You may think of Oregon and Washington as verdant states with an excess of water that can see it through something like this. And it is true that west of the Cascades, both states normally get copious amounts of precipitation in winter. But the rains tend to go away in summer. So farming, industry and households depend on the gradual melting of mountain snows to help provide for their water needs.

SEE ALSO: The Other Big Drought Story You Need to Pay Attention to

The snowpack map above points to possible trouble ahead for residents of the Pacific Northwest — and across the U.S. West.