Parts of Europe have also been deluged, and today, Paris is flooding

An animation of infrared imagery from the GOES East satellite shows the development of a massive complex of severe thunderstorms over central Texas late Wednesday through Thursday, June 1 and 2, 2016. The almost black tones show the coldest cloud-top temperatures. Here, the tops of thunderstorms have punched highest into the atmosphere. (Map data: © 2016 Google/INEGI. Imagery: SSEC Real Earth. Animation: Tom Yulsman) A slow-moving low-pressure system sucking tropical moisture from the Gulf of Mexico into Texas and nearby areas is forecast to become nearly stationary today. The very unfortunate result: More thunderstorms will pummel a region already reeling from record rainfall. Flooding from the rainfall has been implicated in the deaths yesterday of five U.S. Army soldiers at Fort Hood in Texas. Their military vehicle overturned at about 11 a.m. local time while they were attempting to cross a swollen creek. Three soldiers were rescued, while another four were swept away and remain missing as I'm writing this on Friday morning. (For the latest updates on this tragedy from the Fort Hood Press Center, go here.) The evolution of the mesoscale convective system, or MCS, that contributed to yesterday's tragedy is seen in the animation above. I created it using infrared satellite imagery from the GOES-East weather satellite. The system — a massive blob of multiple thunderstorms — formed over central Texas late Wednesday night and into Thursday. After drenching the San Antonio area with 4 inches of rain, the thunderstorm complex moved north on Thursday, while yet more showers and thunderstorms boiled up in east Texas, including the Houston area. 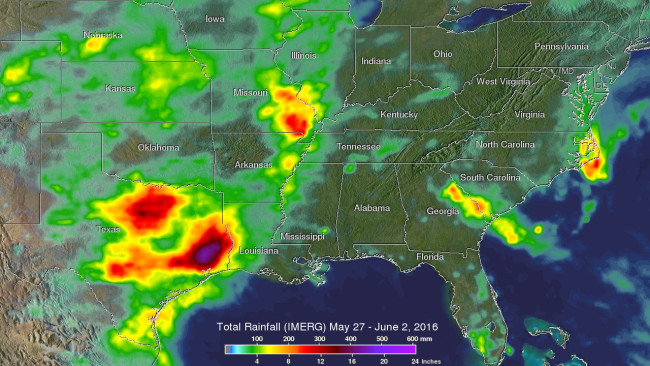 Rainfall totals estimated from satellite measurements from May 27 to June 2, 2016. Accumulation in parts of southeastern Texas were estimated by NASA's IMERG system to exceed 20 inches. Heavy accumulation is also evident off the coast of the Carolinas from Tropical Depression Bonnie. (Source: NASA/JAXA/SSAI, Hal Pierce) The deluges on Wednesday and Thursday were the continuation of a remarkable week of drenching rainfall, as illustrated in the graphic above showing estimates for total precipitation between May 27 and June 2. In response to flooding, Governor Greg Abbott has declared a state of disaster in 31 Texas counties. Over 20 inches of rainfall were reported in some areas since May 30, 2016, according to NASA. The remarkable streak of wet weather has been tied to the lingering effects of El Niño, as well as persistent distortions in the jet stream (possibly related at least in part to human-caused climate change). April was the wettest month in Texas history. And just six weeks ago, the Houston area saw record-setting rainfall. Some parts of the region received nearly a season’s worth of rain in just one night. All this rainfall means soils have little to no capacity to absorb any additional moisture. And here's the result:

Animation of Landsat 8 images of southeastern Texas on May 4, 2013 and May 28, 2016. (Source: NASA Earth Observatory) The animation of Landsat satellite images above shows the scale of flooding in southeastern Texas. The first image, acquired on May 4, 2013, shows the Brazos River well within its banks near Monaville, a town located about 50 miles northwest of downtown Houston. The second, captured on May 28, 2016, shows extensive flooding. Meanwhile, at least nine people have been killed by flooding in Europe. As in Texas, a stalled low-pressure system has aimed a firehose of warm, moist air at the region, resulting in a relentless string of thunderstorms, day after day. https://twitter.com/nytimes/status/738694504409116672 Today, parts of Paris have been inundated by the flooding Seine River, prompting the legendary Louvre museum to begin moving masterpieces from vulnerable galleries. https://twitter.com/breakingweather/status/738740324537905152 The Seine began flooding on Wednesday and is expected to crest today as high as 21.3 feet. The last time the Seine rose this high was in 1982. The highest recorded crest of all time was 26.2 feet in January of 1910.