New Study Shows That as the Climate Warms, Melting of Alaskan Glaciers is Adding Significantly to Sea Level Rise

An animation of Landsat satellite images showing dramatic shrinkage of the Columbia Glacier in Alaska. The animation pauses for extra time on the first image, acquired in 1986, and the last one from 2914. (Images: NASA Earth Observatory. Animation: Tom Yulsman) As heat about global warming continues to emanate from the presidential campaign trail, new research published today shows that the melting of Alaskan glaciers is largely the result of a warming climate. According to the study, accepted for publication in the peer-reviewed Geophysical Research Letters, Alaskan glaciers lost about 1.4 trillion tons of ice between 1994 and 2013. That works out to about 75 billion tons a year. Given that rate of ice loss, we're talking about enough water to cover the entire state of Alaska to a depth of one foot every seven years. The melting is unlikely to stop any time soon.

I created the animation above using Landsat remote sensing imagery to help portray just how significant the melting of Alaskan glaciers has been. You're looking at changes to the Columbia Glacier between 1986 and 2014. The glacier flows down the flanks of the Chugach Mountains and into an inlet that leads into Prince William Sound, about 90 miles west of Anchorage. (For a Google map locating the glacier, click here.) As the animation shows, it has been shrinking dramatically. In fact, it is one of the most rapidly changing glaciers in the world. Since 1980, the glacier's terminus has retreated more than 12 miles to the north, it has thinned by about 1,500 vertical feet, and has lost about half of its total volume. 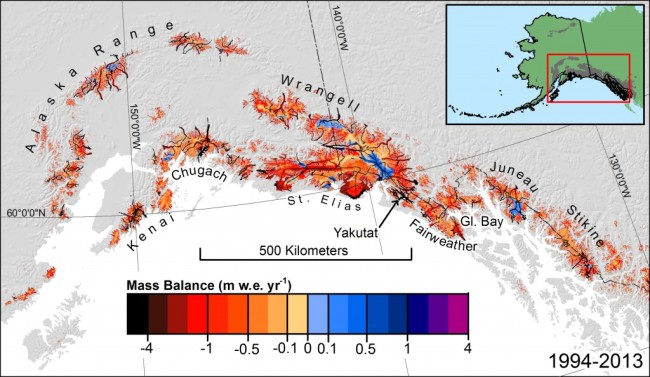 Changes to glacial mass between 1994 and 2013 in the most densely glacierized subregion of Alaska. Black lines indicate survey flight lines. (Source: Chris Larsen/American Geophysical Union) The Columbia is a tidewater glacier, meaning it is a mountain glacier that empties into the ocean. In the map above, which comes from the study, it's one of the glaciers in the region marked "Chugach." Wherever you see yellow, orange and red tones, glacial mass has been lost thanks to a warming climate. Blue is indicative of increased mass. The new research published today has revealed at least one surprise: However fast Columbia and other Alaskan tidewater glaciers may be retreating and calving ice into the sea, they are not the region's primary contributors to sea level rise. The biggest contributions are coming from melting of glaciers that end on land. (Their melt runoff eventually finds its way to the sea through streams and rivers.) 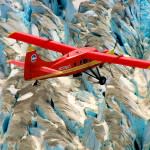 Lidar survey over Alaskan glacier. (Source: Chris Larsen/AGU) As part of their study, researchers from the University of Alaska, Fairbanks and the U.S. Geological Survey used data on 116 glaciers in the Alaska region. The data came from lidar altimetry collected during NASA's Operation IceBridge, airborne surveys in the 1990s, and a new mountain glacier inventory of every glacier in the Alaska region. (This region includes the glaciers of Alaska, southwest Yukon Territory and coastal northern British Columbia.) Click on the thumbnail image at right for a dramatic photo of a plane that conducted one of the lidar surveys, this one over the heavily crevassed Tana Glacier in Southcentral Alaska.

The Randolf Glacier Inventory. (Source: NASA Earth Observatory) Although mountain glaciers hold less than 1 percent of Earth’s total glacial ice volume, their rapid shrinkage is responsible for nearly one-third of current sea level rise. The map above is the first global catalog of such glaciers. It was developed to help scientists working on assessments of the Intergovernmental Panel on Climate Change improve estimates of sea level rise. Here are the details of what you're looking at, from NASA's Earth Observatory, which published the map in June of 2014:

The locations of glaciers are marked in blue. Glaciers outline the world’s major mountain ranges and fringe the ice sheets of Antarctica and Greenland. The map includes some 198,000 glaciers that cover approximately 726,800 square kilometers (280,600 square miles).

For a high resolution version of the map, which enables you to zoom in closely on specific areas, see the Earth Observatory post here.