Nepal May Be Poised For Another Big Earthquake 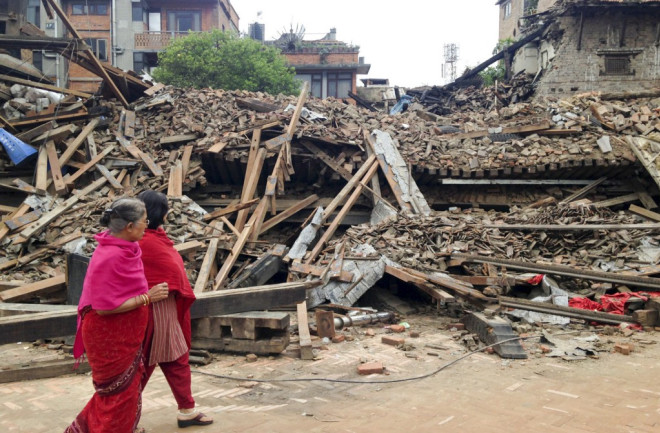 Women walk past destroyed buildings in Bhaktapur, Nepal. Credit: USAID Photo / Natalie Hawwa The 7.8 magnitude earthquake that shook Nepal in April made headlines across the world. More than 23,000 people were injured and 9,000 killed. The earthquake loosed an avalanche on Mount Everest and destroyed several UNESCO World Heritage sites. But the region may be poised for more destruction in the future. A new study indicates that the earthquake transferred stresses from one part of the fault to another, and that could mean another large earthquake lies ahead for this region.

The Main Himalayan Thrust fault, or MHT, is the main fault line along which northern India shifts under the Himalaya region, at the slow pace of 2 cm every year. It has been studied extensively by scientists over the years, producing a detailed map of how the Earth’s crust looked before the cataclysmic April earthquake. To create an accurate “after” picture, a team of international scientists led by Jean-Philippe Avouac of the University of Cambridge took a tripartite approach. They examined so-called P-waves – a type of wave that includes sound waves – emitted during the earthquake, which allowed them to pinpoint the earthquake’s origin with high precision. Using satellite imagery, they mapped the surface deformation. And finally, they used a mathematical model to translate the shape of the seismic waves produced by the earthquake into displacement, or the movement of the fault planes.

The researchers determined that the epicenter of the earthquake was 80km to the northwest of Kathmandu. The slippage happened to the east of the epicenter, just north of Kathmandu, where a 20-30km long section of the fault line moved eastwards at speeds of up to 3 kilometers per second. After roughly 45 seconds, this eastward thrust appeared to crash into some sort of subterranean barrier, in what the authors of the study refer to as a “locked edge.” This derailed it, and the most damaging part of the mainshock ended. However, this type of locked edge found within the enormous MHT fault could be a problem. Two prior major earthquakes, in 1833 and 1934, were likely to have encountered this same locked edge as the MHT shifted. This year’s earthquake once more caused a large chunk of the fault plane to crash into this locked edge, but again failed to break through it. The 2015 quake has possibly loosened – or unzipped – fault line networks resting undisturbed for a long time at the western edge where the rupture first began. That could increase the odds of another earthquake along the MHT in the future. The research is published today in Nature Geoscience.

This portion of the MHT remains tectonically locked – for now – but the recent destructive unzipping to the west means that the fault’s catastrophic unlocking is now more likely than ever. Ominously, there is an 800km stretch of the MHT between the epicenters of the 1833/2015 earthquakes and another major earthquake that struck in 1905 that appears to be due for a powerful tremor. The last earthquake that happened here, in 1505, had a magnitude of 8.5, approximately 11 times more energy than the April mainshock. What can scientists and policymakers do next? Seismologists can continue to monitor the fault line for signs of minor tremors perhaps indicating the imminent arrival of another violent mainshock, but prediction is still incredibly limited. We know roughly where the next major earthquake will happen – and we know approximately how bad it will be – but we simply do not know when exactly this disaster will occur. The best both groups can do is work together to educate the populace and reinforce their infrastructure with earthquake-resistant architecture. Unfortunately, history tells us that when major earthquakes occur, all we can do is hope that there are few people in the wrong place at the wrong time.