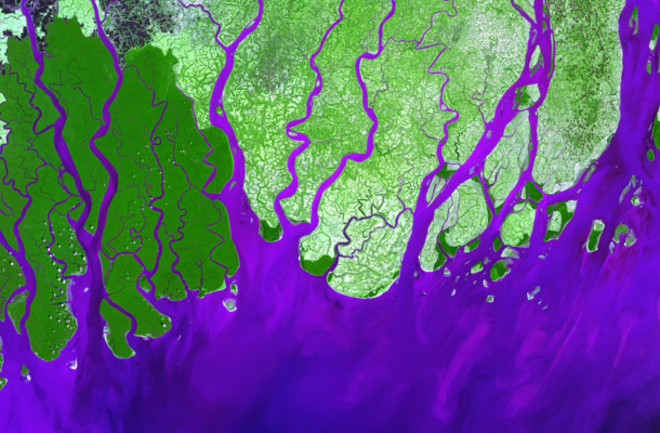 Ganges River Delta. The Ganges River forms an extensive delta where it empties into the Bay of Bengal.

Though humans cannot see light outside the visible spectrum, satellites are able to detect wavelengths into the ultraviolet and infrared. The Landsat 7 satellite uses an instrument that collects seven images at once, with each image showing a specific section of the electromagnetic spectrum, called a band. Each image highlights a different part of the electromagnetic spectrum.

The satellites original images are all acquired in black and white, so color must be assigned via computer to the black and white images. The three primary colors of light are red, green and blue, and each color is given a different band/image. Once the three images are combined, you will have what is called a “false color image." A common band combination shows green, healthy vegetation as bright red, which is useful in forestry and agricultural applications. Landsat images are also used to gather geological and hydrological data along with other kinds of environmental monitoring. In a helpful explanation, the folks at Landsat offer this catchy formula: "One common way that primary colors are assigned to bands can be easily remembered using the mnemonic:

There. That should be easy to remember. My suggestion: try singing it.

Kamchatka Peninsula. The eastern side of Russia's Kamchatka Peninsula juts into the Pacific Ocean west of Alaska.
Boliva, Amazon Basin. This image of Bolivia shows dramatic deforestation in the Amazon Basin. Loggers have cut long paths into the forest, while ranchers have cleared large blocks for their herds. Fanning out from these clear-cut areas are settlements built in radial arrangements of fields and farms. Healthy vegetation appears bright red in this image.
The Himalayas. The snow-capped peaks and ridges of the eastern Himalayas Mountains create an irregular white-on-red patchwork between major rivers in southwestern China.
Terkezi Oasis. A series of rocky outcroppings are a prominent feature of this Sahara Desert landscape near the Terkezi Oasis in the country of Chad.
1 free article left
Want More? Get unlimited access for as low as $1.99/month
Subscribe