NASA: September Was Warmest on Record 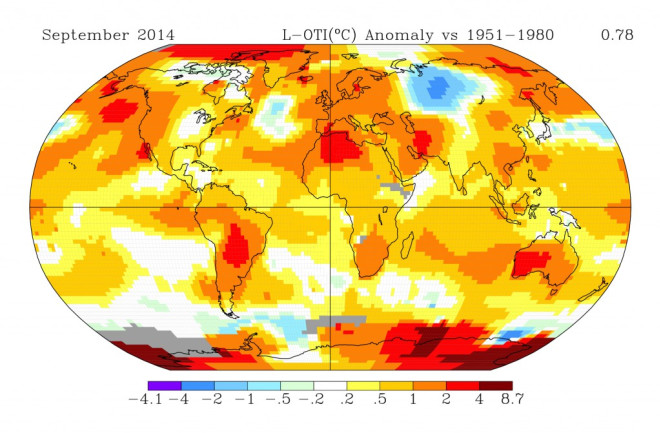 A map showing how temperatures departed from the long-term average during September of 2014. (Source: NASA/GISS) This just in: The global average temperature in September was the warmest in a record dating back to 1880, according to an update from NASA's Goddard Institute for Space Studies. That makes it two months in a row: August was also the hottest on record by NASA's reckoning. Later this week, the National Oceanic and Atmospheric Administration will release its own, independent calculation of how September 2014 stacked up. Sometimes NOAA's calculation differs. (But this month, I wouldn't bet on it.) Unless something really weird happens, 2014 is on track to be the warmest in the instrumental record. The map above shows how temperatures around the globe varied from the long-term average in September. Two things catch my eye:

Source: NASA/GISS You can see these two patterns — the high pressure ridge/low pressure trough over the U.S., and the tongue of warm sea surface water off South America — in the temperature anomaly map for summer of 2014 at right. Click it to enlarge. Over the long term — meaning decades, not month by month or year by year — global average temperatures have been increasing. Over the past 30 years, each decade has been warmer than the one before it, a clear sign that the climate system is accumulating heat as humankind's emissions of greenhouse gases have continued unabated.

Source: NASA/GISS You can see that fact in the graph above, which charts the global average temperature, as calculated by NASA, since 1880. But you can also see a leveling off in the year-by-year increase in temperature over the past ten years. Skeptics of human-caused climate change have used that to declare global warming dead. It's not, as NASA's calculation above shows pretty clearly. NOAA's independent assessment of the global temperature trend shows pretty much the same thing. But what's up with that year-by-year leveling in global average temperature? I've got a story coming out in Discover's upcoming Year-in-Science issue examining this question in some detail. Without giving so much away that I'll get scolded by my editor, here is one way to think of it: If you've ever had the flu you know that even while you are wracked by body aches, sneezing, coughing and other symptoms, your temperature can fluctuate. While on average it is high when you have the flu, you might experience periods when it subsides a bit. Well, the same thing is true of the climate system. Symptoms of climate change abound, as detailed in the latest round of reports by the Intergovernmental Panel on Climate Change — from melting ice sheets, to rising sea levels, to some extreme weather events. But given the recent plateauing in global average temperature, where is the heat going? When the Year-in-Science issue comes out in late December (or early January), I'll post some additional detail here at ImaGeo on what scientists are learning about that question. So please stay tuned for that. In the meantime, keep in mind that 2014 is still on track to be the warmest on record. So that leveling in global average temperature over the past 10 years may be about to end.