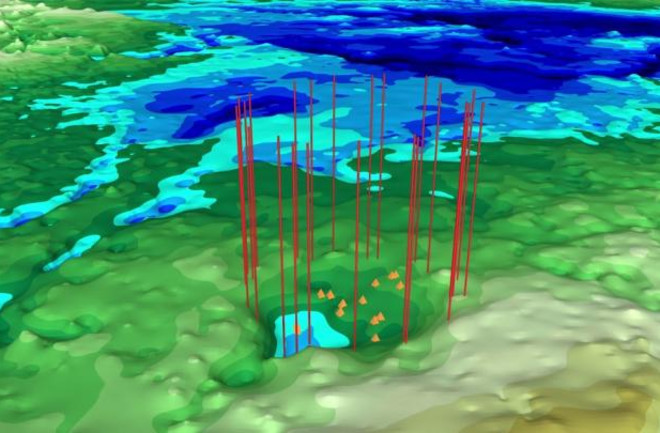 Researchers have identified a second possible impact crater in northwest Greenland, just over 100 miles from the Hiawatha crater announced in November 2018.

Last November, scientists’ minds were blown by the discovery of a 19-mile-wide crater under Greenland. The crater had been hiding in plain sight just 150 miles from a major air force base. Scientists flying airborne surveys with NASA’s Operation IceBridge found it serendipitously while testing their equipment while en route to collect Arctic data. And, on Monday, the same group announced they’ve found another potential impact crater that’s even larger, and it sits just over 100 miles from the first.

This time, they were looking for it.

NASA scientist Joe MacGregor was on the team that found the first crater beneath the Hiawatha glacier in northwest Greenland. He says that after the Hiawatha results were in, he wondered if there could be more craters on the ice sheet that had been overlooked. It only took “a couple hours” of scanning a map of Greenland before he spotted a suspiciously-circular geologic feature nearby the newly-discovered Hiawatha crater.

Ice sheets are fairly rough on landscapes. They’re the reason why the U.S. Midwest is so flat — anything in a glacier’s way gets pulverized. That’s why scientists had long assumed that geologic features like craters, even if they once existed, would smooth out over time if they were under the ice.

MacGregor, glaciologist and NASA IceBridge project scientist, explains that he spotted the new crater on a topographic map NASA made a few years ago of Greenland’s landscape under the ice.

“When you look at that map, in northwest Greenland, you can see a depression — that isn’t Hiawatha (crater),” MacGregor explains. He says he consulted a few other maps, and “it was pretty clear that there was a circular surface expression of this depression. And that was pretty exciting. I sort of got up from my desk and went down the hallway pacing to myself, like, whoa, there’s another crater?”

Then came the hard work, says MacGregor. Impact craters, unlike other roundish holes in the ground, say from ancient collapsed volcanoes, will often cause specific anomalies in magnetic and gravitational fields. Conveniently, researchers had already been doing geophysical surveys of that area — meaning, they already had the data they needed to study the potential crater.

Volcano remnants and impact craters leave different geophysical signatures on the landscape — anomalies in the magnetic and gravitational fields. The latter has to do with the way Earth’s crust settles after an impact — it becomes less dense than it was before. And, in this case, the crater’s signature hints that it really is an impact crater.

It’s too soon to put a real date on this crater, but there are some initial clues. Ice near the crater is at least 79,000 years old, but that could mean a lot of things — for instance, the ice near the crater now may have moved there from farther inland over the millennia.

Ice questions are MacGregor’s specialty. “What we can say with certainty is that the layering of the ice over the second crater looks very different from what we saw at Hiawatha. The layering at Hiawatha was part of what motivated us to suspect the young age. At the second potential crater, the layering is quite a bit older, and it’s smooth with no clear unconformities; it looks like a good chunk of Greenland in that regard. So from that alone, one might reasonably suspect that it’s probably older,” he says.

The other big age hint is its depth — the crater is fairly shallow for having such a wide diameter, which spans 22.7 miles. The scientists estimate that an impact that would form a crater of that size would’ve also created a crater nearly half a mile deep, which means the structure has been worn away quite a bit. It’s about twice as eroded as its Hiawatha neighbor. Based on how much wear-and-tear an ice sheet is expected to have on a crater and how quickly, age estimates for the new crater might be more like a hundred thousand to a hundred million years old.

What are the Odds, Though

If you’re reading this thinking, “what are the odds,” don’t worry, that seriously bothered the scientists, too. If both structures are officially confirmed as impact craters and confirmed as being different ages, as initial evidence suggests… what are the odds that two unrelated impacts would happen just 100 miles from each other?

Thankfully scientists are scientists, so they actually calculated the odds.

Just last month, Sara Mazrouei from the University of Toronto and colleagues published in Science updated estimates for the rate of impacts on Earth, based on data from both known impact craters on Earth as well as our crater-faced neighbor, the moon.

MacGregor and his team used these estimates to calculate the likelihood that two unrelated craters would ever occur so close together. Given the size of the projectiles required to make such a crater, the size of the Earth, and common sizes of near-Earth objects, they estimate an unrelated pair of big craters should spring up about once every seven billion years. Or, in other words, not very likely.

But they looked at it another way, too, though — in a way that reflects the “birthday paradox” you may be familiar with. The birthday paradox deals with the odds that two people share a birthday; mathematically, it’s more common than you might think. In any random group of 23 people, the odds that two will share a birthday is about 50/50. In a group of 70, it’s nearly 99.9 percent certain.

So how many craters need to be blasted into Earth before two of them are near each other without, erm, sharing a birthday? The team again used estimates from Mazrouei: about 355 impacts have probably occurred in the last 650 million years, though only about 10 percent of the Earth’s surface is stable enough to still possess such craters today. The team ran simulations that randomly distributed 355 meteor hits across the planet, and found there would be an average of 13 crater pairs throughout history that would be unrelated, but near each other. Cut that to the 10 percent of craters surviving to today, and you’ve got one, maybe two crater pairs.

Two such crater pairs have already been discovered: one in Quebec, and one in the Ukraine. But that doesn’t mean a third pair is outside the realm of possibility — sometimes three coin flips all come up “heads” even when you’d expect at least one “tails.”

“Both Hiawatha and this second possible crater fall into an unusual category of impact craters,” says MacGregor. “They are on Earth, but they’re covered by ice, which makes them relatively hard to sample in all the ways that one would like to.”

To truly confirm a crater as an impact crater, MacGregor explains, the terrestrial impact geology community is going to need a lot more than a gravity anomaly. But the info they need is under a mile of ice.

“Maybe a different way to think about it is that it takes about 10 seconds to convince a planetary scientist that these are impact craters,” jokes MacGregor, “but it’ll probably take 10 years to convince the terrestrial impact geologists.”

MacGregor says there’s talk of the type of laborious expedition that would be required to study the craters, but no firm plans yet. For now, he’s not quitting his day job with Operation IceBridge, despite his new track record studying craters.

“It’s a lot of fun, but I’ll remain a glaciologist,” says MacGregor. “For hopefully clearly many good reasons, we still want to know a lot more about what ice is going to be doing in the future.”