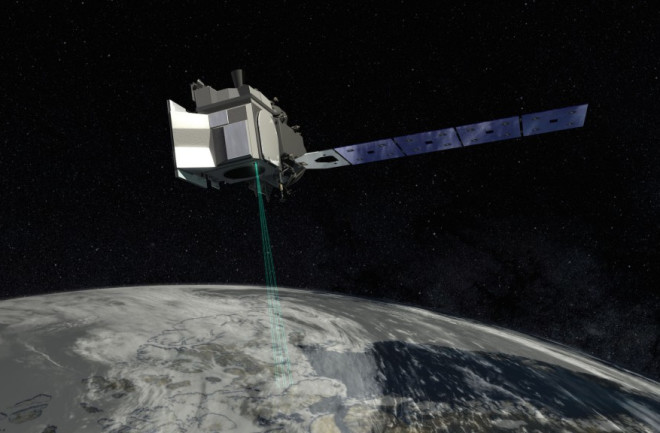 NASA's ICESat-2 spacecraft will measure the height of Earth's melting ice. (Credit: NASA Goddard Space Flight Center) Since 2003, NASA has been monitoring the height of Earth’s ice with lasers. This undertaking began with a satellite — the Ice, Cloud, and Land Elevation Satellite (ICESat) — which ran through 2009. Operation IceBridge has used planes to monitor specific vulnerable ice sheets in the years since. Now, the project continues with ICESat-2, which successfully launched September 15 from Vandenberg Air Force Base in California. Bearing one of the most sophisticated elevation-monitoring lasers ever made, ICESat-2 will measure the height of Earth’s ice, seas, land and trees for the next three-to-seven years, helping to produce a detailed, 3-D map of the planet and detect small, annual changes in elevation. If a glacier loses even 4 millimeters of height, ICESat-2 will let us know.

Here’s how it will work: ICESat-2’s instrument – the Advanced Topographic Laser Altimeter System (ATLAS) will produce 10,000 pulses of green laser light each second, then split each pulse into three pairs of beams, sending 300 trillion photons to Earth with each pulse. A tiny fraction of those photons — about a dozen from each pulse — will strike a surface and reflect back to ATLAS, which will record the round-trip time for each photon. “That light should take about 3.3 milliseconds to make the round-trip from the spacecraft to the Earth and back again,” says Tom Neumann, the Deputy Project Scientist for ICESat-2 at NASA’s Goddard Space Flight Center. “ICESat-2 and its instrument are able record those round-trip times to better than a billionth of a second.” Those flight times, paired with similarly precise information about ICESat-2’s position in space, will give scientists a detailed reading of the elevation and slope of glaciers, icebergs, waterbodies and forests. Changes in those elevations will reveal things like where ice is melting the fastest, how much is melting, and how that relates to areas with snow accumulation. Scientists also plan to use the data to track forest biomass; the height of a forest canopy can be a proxy for how much carbon its trees contain.

It’s taken nine years – more than a year longer than initially thought – and about $1 billion to design and test all the components, and to resolve issues with the ATLAS laser. “The ICESat-2 instrument is the cutting edge of laser altimetry,” says Neumann, who has worked as a liaison between the scientific community and the mission’s engineers. “Anytime you’re doing something new like that, the time it takes to develop or integrate or test such new equipment can take longer than you initially thought, and that was definitely the case with ICESat-2.” But even with extensive testing, things can go wrong; ICESat-1 had engineering flaws that didn’t show up until it was in orbit. Unlike ICESat-2’s ATLAS, which uses a single laser, ICESat-1’s Geoscience Laser Altimeter System (GLAS) instrument had three, each with an expected lifespan of about a year. But just 38 days after it began firing, the first laser failed. Because all three lasers used the same parts and construction, NASA anticipated the same problem would destroy the other two lasers, so the agency came up with a new plan: instead of firing continuously, the remaining lasers would only operate periodically and at a lower temperature.

Despite the mid-game change, ICESat-1 offered scientists new insights. “What we found in Greenland was that almost all of the thinning was concentrated at those outlet glaciers that feed into the oceans,” Neumann says. “We also found that the middle of Greenland was slightly thickening, which is exactly what the theory would suggest: as the air around Greenland gets warmer and holds more water vapor, it can lead to increased precipitation.” They also used the spacecraft to study Antarctic glaciers. And we now know that land ice from Greenland and Antarctica is melting rapidly, adding about 375 gigatons of water to the oceans each year. Data from ICESat-2 will give us an even better picture of the impacts of climate change and will help scientists refine predictions for future changes. “If a model can accurately reproduce the shape of the ice sheet as measured by ICESat-2 and the change in the shape of that ice sheet, it gives us a lot more confidence in those models predictions going forward,” says Neumann. Editor's Note: This story has been updated from an earlier version.