For most of the planet, October brought much warmer temperatures than normal. (Source: NASA GISS) NASA is out with its monthly analysis of global surface temperatures, and the verdict is unsettling: This past month positively obliterated the previous record for warmest October. The global average temperature in October according to NASA's analysis was 1.04 degrees C warmer than the long-term average for the month. The previous record of 0.86 degrees C was set in October of last year. This corroborates the picture drawn by data released a couple of days ago by the Japan Meteorological Agency.

The jump in global temperatures in October was also the greatest departure from average — by far — for any month in NASA's entire record, which dates back to 1880. We're talking 1,630 months here. 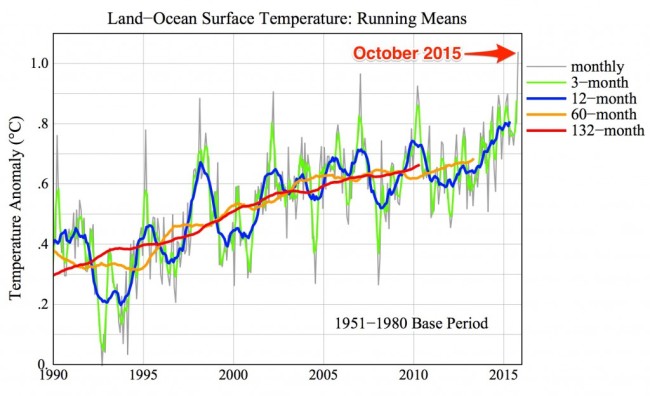 The monthly running mean for global surface temperature anomalies is shown in grey. The other colors show different running means, which tend to smooth out short-term variability and reveal the overall, long-term trend. (Source: NASA/Columbia University) Two things are going on here: El Niño and human-caused global warming. In the graphic at the top of this post, take note of the big, red spear of exceedingly warm sea surface waters extending outward into the Pacific from the coast of South America. You can also see it in this graphic portraying sea surface temperature anomalies in the central and eastern Pacific Ocean: 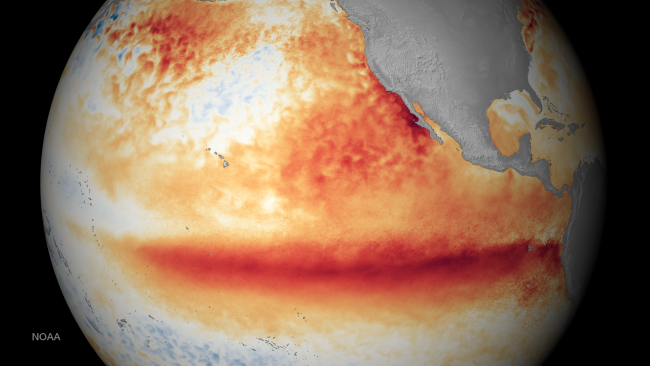 Sea surface temperature anomalies in the central and eastern Pacific Ocean for October 2015. (Source: NOAA Environmental Visualization Laboratory) This warming is a hallmark of El Niño, and the one we are experiencing now is a humdinger. In fact, warming in the central and eastern Pacific set a record this week, which makes it more likely than ever that this event will top out as one of the strongest ever. The El Niño warming of the Pacific now underway has released huge amounts of heat into the atmosphere, thereby contributing significantly to the high global average temperatures we saw in October. But even before this El Niño event, global average surface temperatures had reached record highs. In fact, 2014 was the warmest year on record. The bottom line: "El Niño is turning up the heat even further,” says World Meteorological Organization Secretary-General Michel Jarraud, in a prepared statement. And thanks to human-caused climate change, this El Niño event "is playing out in uncharted territory." The months ahead are likely to be quite interesting.