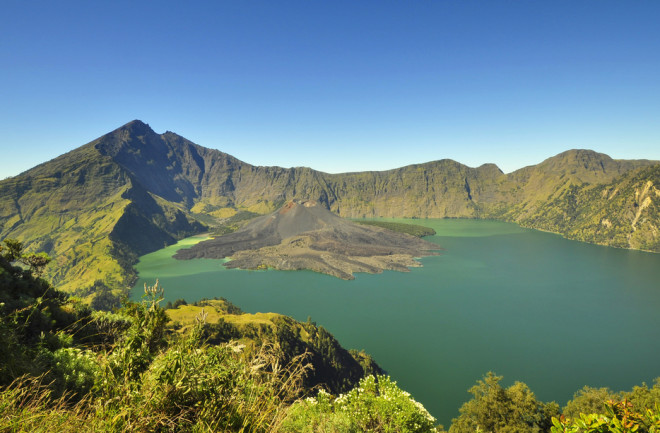 Mount Rinjani volcanic complex, Lombok Island, Indonesia. Image by mohd farid / Shutterstock It was like an episode of Cold Case. With volcanoes. Researchers relied on a combination of polar ice cores, tree-rings, geochemistry and a medieval chronicle little-known in the West to solve one of vulcanology's most enduring mysteries: Which peak blew its top in the mid-13th century, causing a catastrophic eruption that ranks as one of the biggest in recorded history? As with any investigation, the team had to rule out other suspects as it followed a trail of clues — and even read palms, or at least palm leaves. The culprit of the massive 1257 AD eruption, researchers say, is Samalas volcano, on Lombok Island in Indonesia.

For decades, scientists have been searching for the volcano responsible for the largest spike in sulfate deposits in the last 7,000 years, which were revealed in ice cores from Greenland and Antarctica. The spike indicated a massive eruption around 1257. The medieval eruption may have sent up to eight times more sulfate into the stratosphere than the 1883 eruption of Karaktau, often held up as an archetype of volcanoes behaving badly. Researchers say the 1257 mystery spew is comparable in scope to a second-century AD eruption in the Taupo Volcanic Zone of New Zealand, known as the most intense historic volcanic event. The 1257 eruption had global consequences: Tree-ring records, as well as historical and archeological sources, show that the Northern Hemisphere experienced catastrophic floods, crop failures and unseasonable cold the following summer. A handful of possible suspects had been investigated, including New Zealand's Okataina and Mexico's El Chicon. One by one, however, they'd been ruled out through radiocarbon dating or, in the case of Ecuador's Quilotoa, by comparing localized deposits with the chemical composition of those found in the polar ice cores.

The current research zeroed in on Samalas, part of the Mount Rinjani volcanic complex. One of the researchers' tips came from BabadLombok, a 13th century historical record in Old Javanese, written on palm leaves. The chronicle referenced a massive eruption of Samalas that created an enormous caldera. The team was able to accumulate a sizable amount of incriminating evidence, including pyroclastic deposits from the eruption more than 100 feet thick found more than 15 miles from the ruins of the volcano. The range of deposits, and the volume, suggest that the Samalas eruption exceeded that of the Tambora event in 1815, another massive volcanic outburst. The team sampled carbonized tree trunks and branches in the Samalas deposit zone and used radiocarbon dating to confirm a mid 13th-century eruption. The team — which published its findings today in the Proceedings of the National Academy of Sciences —was also able to match the chemical composition of pumice deposits from the Samalas eruption with shards found in both the Antarctic and Greenland ice cores, further evidence that the Indonesian volcano was the culprit. Reviewing wind patterns, researchers were even able to narrow the timeframe for the eruption. The distribution to the west of volcanic ash and other ejecta from Samalas suggest that the dry season's easterly trade winds were prevalent, putting the eruption window between May and October of 1257. Perhaps most tantalizingly, the Babad Lombok notes that the eruption destroyed Pamatan, what was then the capital of the Lombok kingdom. The researchers speculate that the ruins of the city may be buried beneath Samalas' copious deposits, waiting to be discovered as a "Pompeii of the East."