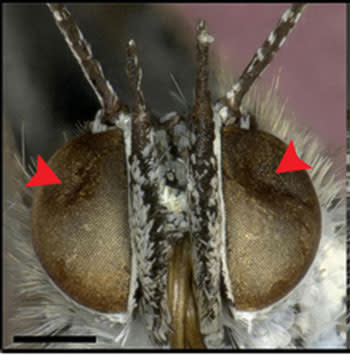 Japanese authorities may have cleared out the human population around the ruined Fukushima Daiichi nuclear power plant, but the native wildlife is still there. A month after the accident, scientists who study the pale grass blue butterfly collected 144 near the plant, and found that they had begun to show mutations like dented eyes and deformed wings

. Six months later, they caught another batch---and, worryingly, found they had twice as many mutations. This suggested that the butterflies' germ line---the cells that turn into egg and sperm---had suffered damage, so mutations could be expected to continue to accumulate down through the generations. Exposing butterflies in the lab to radiation at the levels around the Fukushima plant triggered similar malformations, further strengthening the link between the radiation and the mutations. The levels of radiation absorbed by the butterflies are not enough to harm humans, and this species is notoriously sensitive to environmental contaminants (in fact, that's why scientists were studying it to begin with). But this study is a reminder that the disaster's effects will reverberate for a long time in the natural environment and animal inhabitants of Fukushima. Image courtesy of Hiyama et al. / Scientific Reports