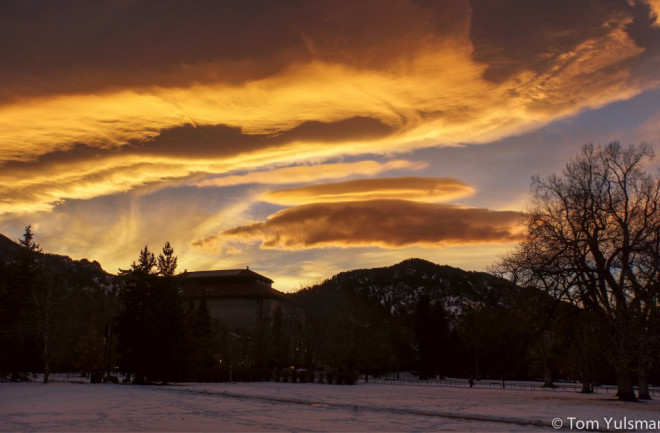 Mountain wave clouds over the Front Range of the Rockies on the University of Colorado, Boulder campus on January 6, 2015. (Photo: © Tom Yulsman) Pics of the Day The setting sun conspired with some spectacular cloud formations this evening (Tuesday, Jan. 6th) to put on quite a fireworks display — perfect for the next installment of ImaGeo's new Pic of the Day feature. I think what we're seeing here is a classic example of a phenomenon known as mountain waves. It happens when relatively brisk winds blow across a mountainous barrier. The mountains you see in the photograph above are actually the foothills of the lofty, elongated Front Range in Colorado, just to the west of the University of Colorado, Boulder. (That's the main quad in the foreground.) Winds blowing over mountains like these are displaced upward, and then accelerate downhill on the lee side. This can cause standing waves to form in the airflow, much like a standing wave forms in the lee of a rock in a rapidly flowing stream. And if there's sufficient moisture, a cloud will form at the crest of the wave.

A standing mountain wave cloud over the foothills near Boulder, Colorado, on the morning of Jan. 6, 2015. (Photo: © Tom Yulsman) Steady, fast airflow can cause mountain wave clouds to linger for awhile. In fact, I shot the elongated cloud in the photograph above at about 10:30 a.m. So it looks like a cloud-forming mountain wave was in place for quite some time today. I've shared other imagery about this phenomenon before, including this post with an animation of satellite images showing mountain wave clouds forming and dissipating over Nevada. And you can find a detailed explanation of the phenomenon here.