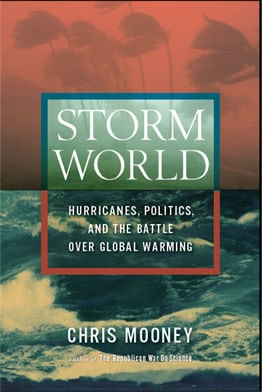 Harcourt Books now has a description up, so no need for secrecy any longer:

Chris Mooney delves into a red-hot debate in meteorology: whether the increasing ferocity of hurricanes is connected to global warming. In the wake of Katrina, Mooney follows the careers of leading scientists on either side of the argument through the 2006 hurricane season, tracing how the media, special interests, politics, and the weather itself have skewed and amplified what was already a fraught scientific debate. As Mooney puts it: "Scientists, like hurricanes, do extraordinary things at high wind speeds."

Mooney--a native of New Orleans--has written a fascinating and urgently compelling book that calls into question the great inconvenient truth of our day: Are we responsible for making hurricanes even bigger monsters than they already are? I'm a bit nonplussed about the bit referencing Gore's movie, but anyway, that's what it says. The book is also now available for pre-order on Amazon. In addition, info about Storm World will be distributed at the American Geophysical Union meeting in San Francisco next week, as well as other relevant upcoming scientific conferences. I will be on hand in San Francisco, attending and reporting on (among other things) the two panel sessions (link, link) on hurricanes and climate, and maybe the poster session as well. While out in SF, I'll also be talking about this subject and others at a great museum, the Exploratorium. This is an open-to-the-public webcast starting at 1 pm PST on Wednesday, the 13th. I may even be busting out a new slide show for it. Even amid all of this, I'll still be putting final touches on the book (though it's about 95 percent done, those last 5 percent are a real pain). Thanks to everyone who's emailed to wish me luck and to offer support so far. It's made a big difference. You're awesome, and I'm doing my best to give you the final product that you all deserve.