Month of February, as Well as This Past Winter, Were Second Warmest on Record Globally

Evolution of global temperature anomalies between February and March. (Source: NASA GISS) Even as half of the United States shivered, exceedingly warm temperatures in most other places pushed winter temperatures globally to their second highest on record, according to figures just released by NASA. This past December through February period — meteorological winter— was topped only in 2007. February itself was second warmest for the month, exceeded only by 1998. I created the animation above to show how global temperature patterns evolved during winter — and to emphasize the strange but now familiar dichotomy in North America. It starts with an anomaly map for December, which shows how temperatures departed from the long term average. Much of Europe, Siberia and the Arctic were particularly warm, as was North America, which helped 2014 finish as the warmest on record. Then the so-called "Ridiculously Resilient Ridge," or "RRR," of high pressure became locked in place again over the eastern Pacific Ocean, solidifying record warmth in the western part of North America. The flip side of that pattern was a huge dip in the jet stream that allowed brutal Arctic cold to pour south into the eastern part of the continent.

Source: NASA GISS In seen in the animation, that pattern is as stark as could be for the month of February — as is a remarkably widespread blob of anomalous warmth across all of Eurasia. The pattern also is visible in the anomaly map for the entire winter period (thumbnail at right). Unfortunately for California, Oregon, Washington and Alaska, the ridiculous ridge is not likely to become any less resilient between now and mid-May, according to the National Oceanic and Atmospheric Administration's three-month outlook. This is particularly bad news for California, which is suffering through its worst drought on record and may have just one year of water supply left in its reservoirs. Heat makes drought worse through evaporation. For the entire world, the U.K. Met Office has this long-range prediction, covering the period April through June: 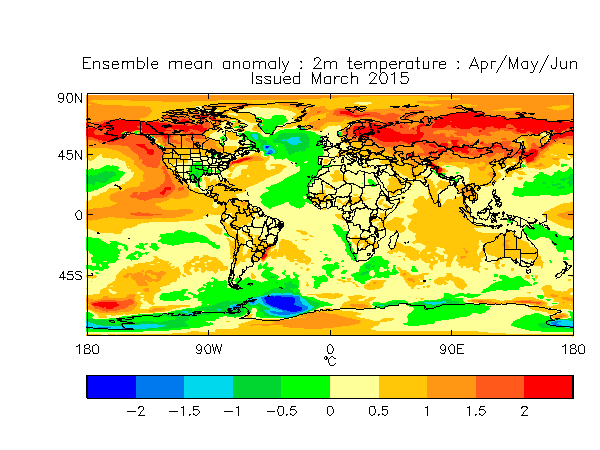 Source: U.K. Met Office It looks like it may be shaping up to be quite a warm year globally. That's particularly so in the north, where Arctic sea ice has already taken a bit of an early dive. NASA is not the only agency to publish regular updates on global climate observations. NOAA produces its own month-by-month assessment. The agency should be coming out with February's global report soon. We'll see how it matches up with NASA's assessment.