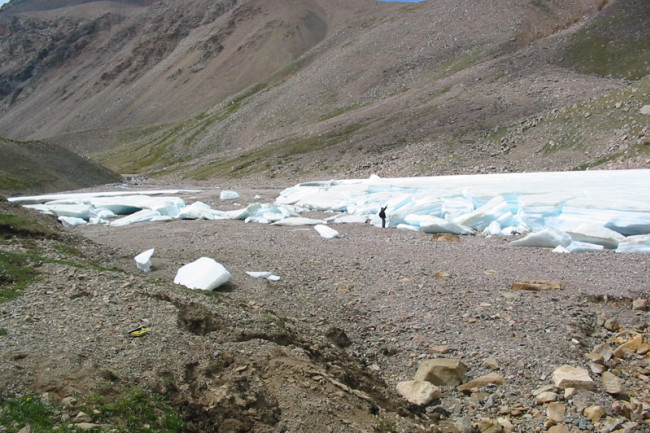 , it's real: Mongolia is launching a $750,000 geoengineering project to freeze vast quantities of the Tuul River

in order to cool its capital city of Ulan Bataar during the sweltering summer, and to provide drinking water as the ice melts, as well. While specifics about exactly how the cooling will work are scarce, details about the freezing process are not, as it will mimic a natural process that already occurs on rivers in the north. Thick ice sheets called naleds

form each winter on the surfaces of rivers in exceptionally cold regions of the globe. As the surface of the river freezes, water comes seeping out of holes in the ice, drawn surface-wards by the difference in pressure, and freezes into a new layer on top when temperatures drop at night. The engineering team behind the project plans to help this process along by drilling new holes throughout the winter, causing thicker naleds to form. And naleds are already quite thick in their natural form---in some cases more than twenty feet deep. The process, according a geologist involved in the project interviewed by The Guardian

, should work in any city where temperatures stay around 23 F to -4 F for a few months each year and the summers are unbearable. Anyone want to volunteer? One does wonder, though, what's going to happen when people down stream of the capital city discover that their summer water source has been frozen up for use by city dwellers? And how will this affect the ecosystems downstream? [via The Guardian