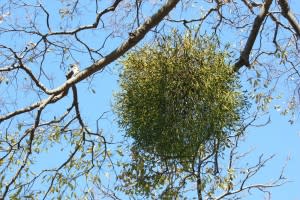 Despite its romantic holiday association, mistletoe has long been villainized in ecology circles for being a parasite---the vine wraps itself around trees and steals nutrients from them to survive. Nobody likes a mooch, but researchers in Australia have found that this parasitic plant is not all bad. In fact, their findings [pdf] published in the Proceedings of the Royal Society of Biological Sciences this July suggest mistletoe may actually be a keystone species in forest ecosystems. The plant is relatively sparse but plays a critical role in maintaining the overall health and diversity of species in its environment. The researchers began by setting up an experiment to compare species diversity in three types of woodland environments: those with mistletoe, those without mistletoe, and those from which the researchers removed the mistletoe. After three years the woodlands with mistletoe had gained a few new species of birds, and the mistletoe-free forests showed no change. But in the woodlands where the mistletoe had been removed, a third of the animal and insect species disappeared along with it. The researchers suggest this is because the evergreen vine is a key source of structure and nutrients for these species. Most trees lose their leaves in the fall, but mistletoe produces and drops leaves in spring, summer, and winter too, so birds can nest in the leafy mistletoe balls when all other branches are bare. Fallen mistletoe leaves also contain more nutrients than most because the parasite feels no need to conserve energy when it has an essentially endless supply to steal from its hosts. Thus insects and ground-dwelling animals can collect nutrient-rich leaves when there's little else to eat. This also explains the parasite's seasonal significance---since it was the only plant green and growing in the forest during the holidays, sprigs of the stuff were brought into homes as a symbol of fertility and romance. Based on this research, people and ecosystems alike will be looking to mistletoe to get lucky this holiday season.