Mining Mistake May Have Set Off Massive Mud Eruption 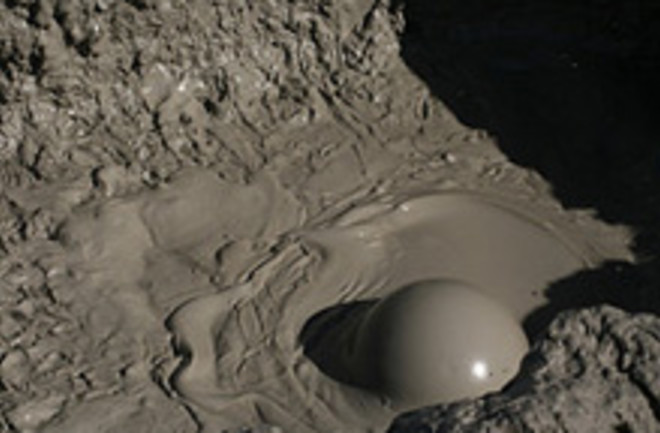 As Lusi, the world's fastest-growing mud volcano, now stands on the brink of collapsing upon itself, the geologists studying this bizarre dirt-spewing pit now say they are almost certain that a well drilled for natural gas production caused it to form. Lusi first erupted mud and toxic gas in May 2006, killing 13 people and soaking a dozen east Indonesian villages. Lapindo Brantas, the mining company, said an earthquake two days prior provided the jolt that kick-started the volcano. But Michael Manga and his grad student Maria Brumm of the University of California, Berkley investigated that claim, and they found that was highly unlikely the earthquake was the cause. The quake was centered more than 150 miles away from the mud volcano, the researchers say, and none of the ways earthquakes are triggered could explain how it set off Lusi. But a team of scientists led by Richard Davies of Durham University in the U.K. say that drilling operations ignited the mud monster. When miners dug 3,000 meters into the earth, they hit an aquifer buried deep underneath the mudstone. This released the pressure built up inside the aquifer, the scientists say, which provided the raw power to blow mud all over the place. Since its initial eruption, Lusi has gushed forth 50 to 60 swimming pools worth of mud and muck every day. As of last week a court in Indonesia said this was a natural occurrence, one of many intriguing turns in the Lusi story. Indonesian welfare minister Aburizal Bakrie is also the country's richest man, and his family owns the mining company. Then there are the just plain strange elements: Last year, desperate to stop the mud flow but with nothing better to try, the Indonesian government dropped 2,000 concrete balls into the volcano's vent, Davies says. Nothing happened. The mud is currently restrained behind retaining walls, and will begin to recede now that the two-year mud eruption is coming to an end. But Lusi's collapse will leave a huge crater, Davies says, and its center could fall almost 150 meters in the coming decade. This could further fracture the surrounding area, Davies says, even shift the course of rivers. At least the afternoon mud showers should stop.