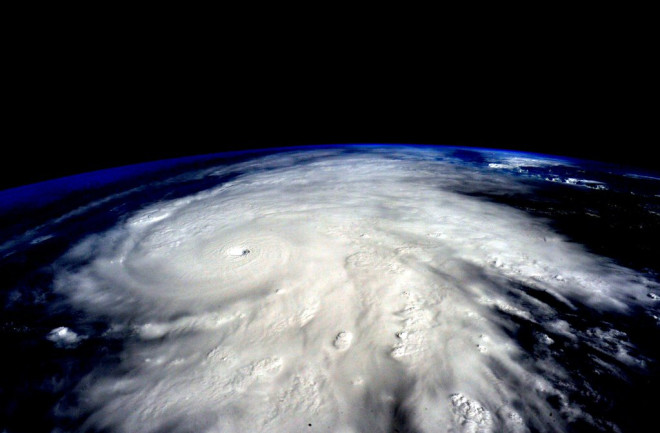 As Hurricane Patricia approached Mexico on Friday, Oct. 23, 2015, , astronaut Scott Kelley took this stunning photograph of the sprawling, powerful storm from the International Space Station. (Source: Scott Kelly via Twitter) At 2 p.m. Eastern Daylight Time, a NOAA Hurricane Hunter aircraft flying into the heart of Hurricane Patricia took measurements indicating that surface winds in the cyclone were blowing at about 190 miles per hour at the surface. That's down a little from earlier in the day, when 200 mile per hour readings had qualified Patricia as the strongest hurricane on record in the Western Hemisphere. In it's latest update, issued at 5 p.m. EDT, the National Hurricane Center warned:

Confidence is high that Patricia will make landfall in the hurricane warning area along the coast of Mexico as an extremely dangerous category 5 hurricane during the next few hours.

The storm poses a grave threat of wind damage and storm surge, as well as flash fooding and landslides inland.

The GOES East satellite acquired this false-color image of Hurricane Patricia shortly before the epic storm made landfall along Mexico's Pacific coast on Oct. 23, 2015. (Source: NOAA) Patricia will also go down in the record books as the fastest intensifying hurricane ever observed in the Western Hemisphere, according to Jeff Masters and Bob Henson of Weather Underground. In a post earlier today, they also noted that the 200 mile per hour measurements, taken by the Hurricane Hunter aircraft, "are the highest reliably-measured surface winds on record for a tropical cyclone, anywhere on the Earth." This recognizes that the wind speeds for two other cyclones — Nancy and Violet, both in 1961— probably were overestimated by about 10 mph. But even if you don't look at it this way, Patricia would still be the third strongest cyclone ever recorded on planet Earth. These and other amazing facts about Patricia prompted the normally circumspect weather experts to describe the storm with these words:

What's left of Patricia after it wreaks havoc in Mexico will likely head northeastward toward Texas, albeit vastly diminished. Even so, remaining moisture and energy from the storm are expected to add insult to injury to a rainfall event already lashing parts of the state and raising the risks of of severe flooding.