"Might not feel like it today, but 2016 will be the warmest year in the surface temperature records" 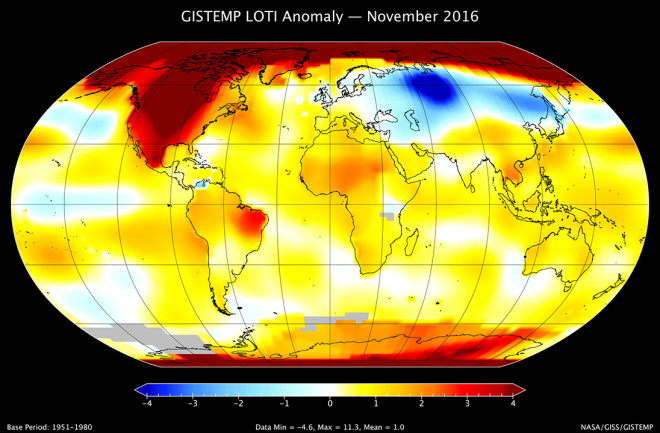 Temperature anomalies for November 2016. North America, and especially the Arctic region, were much warmer than average. Central Russia was colder than normal. (Source: NASA/GISS/GISTEMP) The quote in the headline is from a Tweet this morning from Gavin Schmidt, director of NASA's Goddard Institute for Space Studies, following release of his institute's monthly climate analysis. It found that November was the second warmest such month in 136 years of modern record-keeping. It was edged out only by November of 2015, which was 0.07 degrees Celsius (0.126 degrees F) warmer. As Schmidt's Tweet suggests, despite November's second-place status, and today's frigid cold, the full year of 2016 is firmly on track to end as the very warmest on record. If you're wondering what goes into the analysis, according to NASA:

...it is assembled from publicly available data acquired by about 6,300 meteorological stations around the world, ship- and buoy-based instruments measuring sea surface temperature, and Antarctic research stations.

For more details about how the analysis is carried out, including how adjustments are made to account for the urban heat island effect, see the GISS Surface Temperature Analysis, or GISTEMP, pages — here. If you have been shivering today under the massive blast of Arctic air that is surging south across large parts of the United States — and wondering why anyone would talk about record warmth — keep in mind that what you are experiencing today is weather. That's the state of the atmosphere at a particular place and a particular time. And the state of the atmosphere today in much of the United States is, well, polar. Here is what's producing these conditions:

Source: National Weather Service The polar vortex, a large area of low pressure and cold air in the high north, often will expand in winter, sending cold air southward with the jet stream — as the graphic above demonstrates. This is a normal feature of winter weather in North America, with large outbreaks of Arctic air plunging far south into the United States. The current frigid outbreak may be helping us forget just how warm it was in many places across the United States last month. In fact, during November there were 48 record high temperature records set in the U.S. for every record low, according to an analysis by Climate Central. "Of all the daily temperature records set or tied last month, 98 percent of them were record highs," the analysis found. While polar blasts come and go in a matter of days, climate is something that takes place over a much longer time period. Climate is, in fact, the average of the weather in a particular area — or the globe overall — over years, decades, centuries and longer. With that definition in mind, consider what the trend in global climate looks like:

Source: James Hansen and Makiko Sato The trend lines show how the global average surface temperature of the Earth has differed from the 1880-1920 baseline, through last October. (The graph hasn't been updated yet for November.) That baseline period was chosen to show the magnitude of warming relative to the pre-industrial period. The current year will probably come in at a little less than 1.3 degrees C above preindustrial times. The goal of the landmark Paris Agreement, now ratified by 117 nations including the United States, is to keep global warming well below 2 degrees C above preindustrial times. We're obviously pretty far down the road to that unhappy destination. And with the election of Donald Trump to the U.S. presidency, we may well accelerate a bit in that direction. That's because he has threatened to withdraw the United States from the agreement, and to cancel policies initiated by President Obama to reduce our emissions of climate-warming greenhouse gases.