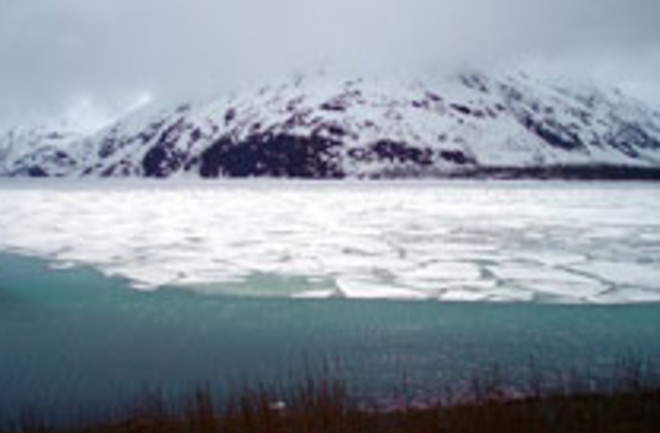 Last summer, the Arctic was an unusually watery and warm place. Sea ice around the pole shrank to a record low, while air temperatures over Alaska were unusually warm from August to October, hovering about 4 degrees Fahrenheit above average. To understand how the two events were related scientists studied the feedback cycle in which the dark, open water around the pole absorbs more heat than reflective ice, thus causing more atmospheric warming. In the resulting report, which will be published on Friday in the journal Geophysical Research Letters, researchers say that the phenomenon is powerful enough to cause extra warming more than 900 miles inland. That bodes ill for the Alaskan permafrost which supports roads, towns, and oil rigs and pipelines; if the permafrost thaws, all this infrastructure could be undermined. In addition, the thawing tundra could release methane that's been frozen for millennia. Since methane is a powerful greenhouse gas, that release could further accelerate global warming. Another research group has already predicted rapidly melting sea ice this summer, and the trend shows no sign of abating. To the permafrost research team, that means Alaskan residents will see their environment changing around them. The effects of melting are already evident in parts of Alaska, the scientists said: as pockets of soil collapse as the ice it contains melts, highways buckle, houses are destabilized and trees tilt crazily in a phenomenon known as "drunken forests" when the earth beneath them gives way.

"There's an interconnectedness about the Arctic," [lead author David] Lawrence said. "When sea ice retreats and retreats very rapidly it impacts other parts of the system, like warming temperatures over land. And warming temperatures over land can also accelerate the degradation of permafrost, particularly permafrost that's warm right now" [Reuters].

But because these drastic changes are unprecedented in recorded history, researchers say they just don't know how much the Arctic ecosystem will change.

"An important unresolved question is how the delicate balance of life in the Arctic will respond to such a rapid warming," Lawrence said. "Will we see, for example, accelerated coastal erosion, or increased methane emissions, or faster shrub encroachment into tundra regions if sea ice continues to retreat rapidly?" [MSNBC].

All good questions, Lawrence, which we wish you didn't have to answer. Image: flickr/somewhereinAK