Although NASA pegs March as being the fourth warmest since record-keeping began in 1880, temperature patterns varied widely as is seen in the map. The color coding shows the degree to which temperatures departed from the long term average. (Source: NASA Goddard Institute for Space Studies) An area of extraordinarily high temperature stretching more than half way around the globe helped propel this past March into the record books as the fourth warmest since historical record-keeping began in 1880, according to NASA's Goddard Institute for Space Studies. The global average temperature for March was warmer only in 2002, 2010 and 1990. The massive sea of warmth extending from Europe across Russia and into North America is clearly evident in the map above, which shows how temperatures during the month departed from the long-term average. The dark red tones show where average temperatures were 4 degrees C or more higher than normal. Within that dark red zone, wildfires are burning today — and have been for much of April. 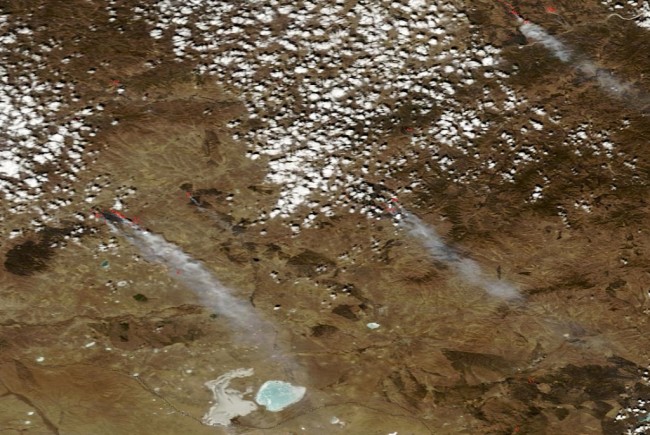 NASA's Terra satellite captured this image of smoke from wildfires burning on Monday, April 14th to the southwest of the Russian city of Chita. The red dots indicate spots where the satellite sensor detected a fire signal. (Source: NASA) Voice of Russia Radio reports that as of April 9, wildfires were raging in the Russian Republic of Buryatia in the Lake Baikal region, and in the Trans-Baikal territory. Other fires had been burning across a wider region, but they were quenched by last Wednesday. The eastern Trans-Baikal region periodically experiences dry and windy conditions in spring, which contributes to a high risk of wildfire. The spate of high temperatures cannot have helped the situation. The satellite image above was acquired by NASA's Terra satellite today. Clearly visible are plumes of smoke from wildfires burning north of the Mongolian border and not far from the city of Chita. The red dots in the image shows area where Terra's sensor made a fire detection. Temperatures in Chita soared today to nearly 79 degrees F today. The record high in the city for the month of April is 79.7. All of this comes a day after the Intergovernmental Panel on Climate Change issued the final installment in its Fifth Assessment Report. The report is long and complex, but the take-away message is that emissions of the greenhouse gases that are causing global warming are skyrocketing, very little has been done so far to rein them in, and we're running out of time to make the cuts necessary to avert the most dangerous climate change impacts. Quoted in a New York Times story, Ottmar Edenhofer, a German economist and co-chairman of the committee that wrote the report, had this to say: