Massive fracture in Antarctic ice shelf is 70 miles long, a football field wide, and a third of a mile deep 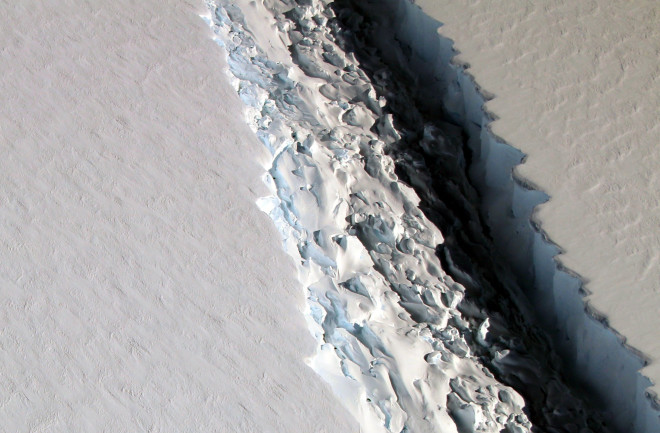 A fissure in the Antarctic Peninsula's Larsen C ice shelf, as photographed on Nov. 10, 2016 by a scientist on NASA's IceBridge mission, an airborne survey of polar ice. (Source: NASA) A massive rift in the Antarctic Peninsula's Larsen C ice shelf has been growing steadily, threatening to cut all the way across. If it does, an iceberg roughly the size of the state of Delaware — and perhaps even bigger — will float off. New observations by scientists on NASA's IceBridge mission, an airborne survey of polar ice, reveal that the rift is now about 70 miles long. And it cuts down about 1,700 feet, all the way through the floating shelf of ice. Should Larsen C throw off a Delaware-sized iceberg, it wouldn't be terribly unusual in and of itself. Ice shelves naturally shed large chunks as part of their natural life cycles. “That’s just part of life for an ice shelf,” says Ala Khazendar of NASA’s Jet Propulsion Laboratory. “That’s how they behave.” But scientists are concerned that if Larsen C does let loose a massive new iceberg, this will be just the beginning of an irreversible retreat under a warming climate, eventually leading to the demise of the entire ice shelf. And that, in turn, could lead to further sea level rise. Larsen C forms part of an icy fringe along the east coast of the Antarctic Peninsula. Since it, like all ice shelves, floats on sea water, a collapse here will not by itself raise global sea levels.

Click the map to watch an animation showing the disintegration of a portion of the Larsen ice shelf in the early 2000's. (Source: Scott Polar Research Institute) But ice shelves like Larsen C act as massive buttresses, helping to slow the flow of grounded ice streams and glaciers behind them. When an ice shelf collapses, that grounded ice behind it accelerates toward the ocean. And that does help to raise sea level. Larsen C neighbors a smaller portion of the broader icy fringe that disintegrated in 2002. That smaller portion had developed a rift very much like the massive Larsen C rift visible in the photo at the top of this post. That oblique view of the Larsen C rift was photographed by scientists on NASA's IceBridge mission on Nov. 10, 2016.

Source: NASA Worldview The giant rift in the Larsen C ice shelf is visible from space, as seen in this imagery acquired by NASA's Terra satellite on the same day that scientists aboard the IceBridge mission photographed it. In the animation, I've marked the position of the rift in blue. Please click to enlarge the animation.

Source: NASA Earth Observatory And here's an even clearer view of the crack in the ice shelf, acquired on Aug. 22, 2016, also by Terra. The ice shelf comprises the left half of the image, and thinner sea ice appears on the right. Other fissures are also visible in the image. But these have stopped growing, probably because of unseen obstacles in the ice, according to NASA. Meanwhile, the 70-mile long crack appears to have broken through those obstacles. "What’s happening now is different," Khazendar says. "This crack goes farther and has started propagating northwards."