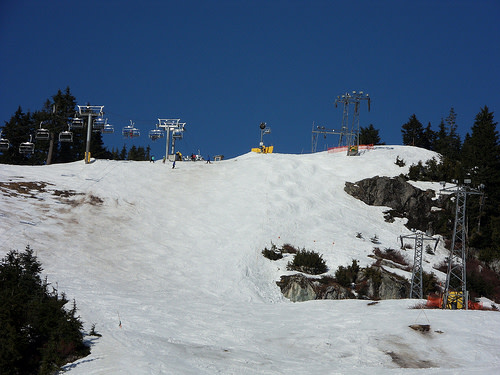 This winter, an Arizona ski resort, Snowbowl, will be the first to use treated sewage water, and sewage water alone, to make manmade snow. Recycling's usually a good thing, but opponents of the plan worry about chemicals left in the snow, and an August report by a civil and environmental engineer says that the recycled water, already used for irrigation in Flagstaff green spaces, may contain antibiotic-resistant bacteria. As Virginia Tech’s Amy Pruden describes in an unpublished report

, her group tested reclaimed water from various green spaces irrigated by Flagstaff’s recycled water and found five of the eight antibiotic resistance genes that they were testing for. These genes allow disease-causing bacteria, such as Staphylococcus aureus, to flourish despite antibiotic treatments. It's unclear whether the bacteria in the wastewater that contain these genes are disease-causing, but growing them in a dish to find out is the next step, Pruden told the Times

were a source of antibiotic-resistant bugs. The plants foster bacterial growth to break down organic matter, then treat the effluent with ultraviolet light or chlorine to kill bacteria before discharging the wastewater, but the treatment doesn't kill all microorganisms. Nothing has changed in response to the findings yet, but Pruden has been appointed to an advisory panel

in Flagstaff that will decide how to respond to the possibility of having antibiotic resistant bacteria in water already used for irrigation. Snowbowl plans to start spraying manmade snow around Thanksgiving.