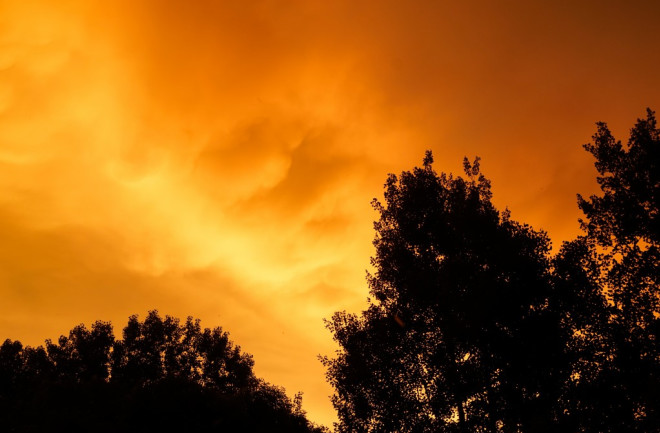 The view from my deck in Niwot, Colorado on June 9, 2016. (Photo: ©Tom Yulsman) I know what you're probably thinking. Yulsman totally manipulated this sunset image in Photoshop. But actually, this is the JPG file straight out of the camera (a SONY A7R with a Zeiss zoom lens attached). The camera's JPG processing algorithm probably punched up the vibrance of the colors a little, and shifted the white balance a bit toward yellow. But quite honestly, this is close to what the sky looked like last night from my deck in Niwot, Colorado after a series of thunderstorms had rumbled through and the Sun dipped below the horizon. I'm posting this image and the ones below not just because of the sheer spectacle of the sky catching fire, but also to highlight a marvelous meteorological phenomenon known as mammatus clouds. These are rounded, pouch-like structures on the underside of clouds, typically thunderstorm clouds, known scientifically as cumulonimbus. You can see the beginnings of mammatus pouches in the image above. But the light was so fiery bright during that stage of the sunset that it was difficult to discern them. Also, not many had formed just yet. But as the sunset progressed, and the fires cooled a bit, more mammatus pouches formed, and they became more evident:

The light reflected off the clouds caused everything to glow with a golden-orange light, including a giant, venerable cottonwood in my backyard. (Photo: ©Tom Yulsman) The mammatus pouches may look ominous. Indeed, when I saw them for the first time I thought they were a signal that basketball-sized hail was about to fall. (Okay, I exaggerate just a bit.) Or that a tornado was about to drop from one of the pouches. But actually, mammatus clouds are often seen after the worst of a thunderstorm has passed. And that was precisely the case last night. They also can form in other kinds of clouds, including thin and wispy cirrus, and even within jet contrails, as well as the pyrocumulus ash clouds that can billow up during volcanic eruptions. The word "mammatus" is Latin for “having breasts." I think this closeup suggests the name is appropriate:

Closeup of mammatus clouds. (Photo: ©Tom Yulsman) Many hypotheses have been advanced for how they form. The most common explanation is that evaporation of subsiding ice particles and rain droplets inside a thunderstorm cloud causes cooling within bubbles of air. A warm bubble would rise, but these are cold (relatively speaking), so they protrude downward. For a more detailed explanation, check out this online meteorology guide from the University of Illinois. And for all the science you could ever want about mammatus clouds, there is "The Mysteries of Mammatus Clouds: Observations and Formation Mechanisms," published in the Journal of Atmospheric Sciences in 2006. I'll leave you with one last image, shot just as the light was fading:

©Tom Yulsman At this point, the mammati had reached their breast-like peak. And then, within just a few minutes, the fire in the sky was quenched, and the clouds moved northeast...