Magnetic Maps Behind one of Nature’s Craziest Migrations 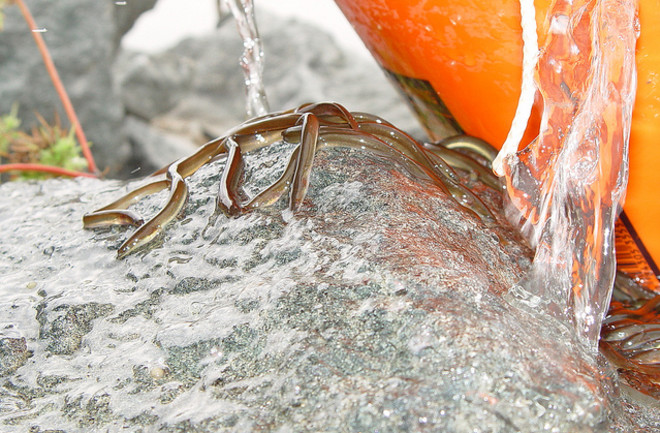 Young eels, or elvers, migrate from their ocean hatcheries to brackish waters where they mature. (Credit: Maryland Fisheries Resources Office, USFWS) In the middle of the Atlantic Ocean, there’s an enormous patch of seaweed that’s perplexed sailors for centuries: the Sargasso Sea. This strange place is where American and European eels go to breed. Once born, the little eels — called elvers — have to venture toward land. American eels live out their lives — which can be more than a decade — just off the eastern seaboard. Their cousins across the pond live everywhere from Scandinavia to North Africa. Then, at the ends of their lives, both species journey thousands of miles out to sea to lay their eggs. It’s a truly remarkable journey. And scientists have tracked this migration for the first time ever in recent years. For a century, the eels’ path was a mystery. They left the East Coast and just magically appeared in the Sargasso Sea. To crack the case, researchers had to figure out how to attach pop-up satellite tags to the eels that wouldn’t kill them during the sometimes 1,500-mile swim. The researchers figured out that the eels use ocean currents to hitch a ride to their chosen coast.

After their birth in the Sargasso Sea, American and European Eels migrate toward land. (Credit: USFWS) And in a paper published Thursday in Current Biology, scientists have announced another discovery into how they do it. By studying European eels, the researchers figured out these eels actually have a magnetic map. Rather than guiding the fierce little swimmers toward land, the “map sense” steers them toward the Gulf Stream, which offers an easier ride toward Europe. "We were not surprised to find that eels have a magnetic map, but we were surprised to discover how well they can detect subtle differences in magnetic fields," said University of North Carolina, Chapel Hill scientist Lewis Naisbett-Jones. "We were even more surprised when our ocean simulation models revealed that the little eels use their map not so much to locate Europe, but to target a big conveyor belt — the Gulf Stream — that will take them there. Presumably, a little bit of work (i.e., swimming) helps increase their chances of catching a mostly free ride to their destination." The team figured this out by dropping elvers into an experimental apparatus that produced magnetic fields mimicking those experienced along the animals’ migratory path. The scientists simply dropped the baby eels into their contraption and watched which way they swam. Then they used computer models of ocean currents to simulate how their results would play out in the real world. Elvers that swam even vaguely in the right direction would have a much higher chance of reaching the Gulf Stream, scientists found. This sixth magnetic sense put them in good company alongside sea turtles and salmon. However, the elvers’ journey toward land is actually just the start. There’s a major obstacle once they get there. Elver fishing is booming. American anglers can get thousands of dollars per pound for the well-traveled and tiny eels. Once sold, the elvers are raised to adulthood and sold for sushi — presumably to customers totally unaware of the strange lives these eels have had.