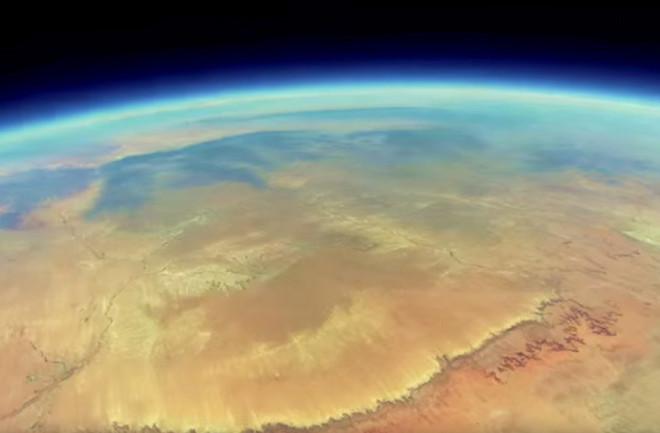 (Screengrab from Bryan Chan/YouTube) This is a science story with a happy ending, but oh boy was the intermission long. In June 2013 a group of Stanford students attached two cameras and a cell phone to a weather balloon and sent it into the stratosphere. The team was shooting high-altitude video and measuring atmospheric conditions as part of a dissertation project. The launch itself was successful, but something went awry in the final stages, and the balloon's payload was assumed to be forever lost somewhere in the Arizona desert. Two years later, their lost experiment was discovered, and the footage is amazing.

At the time of the launch, the Stanford team was conducting research on fluid lensing, which uses algorithms to photograph objects through turbulent mediums. The team, for example, developed theoretical algorithms to shoot crystal clear photos of reefs from the air. The algorithms remove the distortions caused by crashing waves reflections, allowing you to see through the water. The same technology works through turbulent atmospheres, like the Venus transit in front of the Sun. They were also testing the capabilities of cell phone GPS technology, and, above all, they were photographing the Grand Canyon from 100,000 feet in the sky. Unfortunately, all didn’t go to plan. When the balloon reached an altitude of 97,000 feet, they lost contact with the cell phone that had hitched a ride. The phone, upon returning to Earth, was supposed to send a text with its GPS coordinates. It never happened.

A Twist of Fate

The team offered a $1,000 reward for the person who found their payload, but after two years passed the team assumed the project was lost forever in the desert. But two years later a woman found the team’s beloved project while on a hike — 50 miles from the launch point. And, honestly, a better person couldn’t have discovered it. In a Reddit post, Bryan Chan explained that the woman worked at AT&T, so she immediately knew to take the phone’s SIM card to a local store to identify the owner. Chan wrote that the team basically freaked out after getting their long lost footage and data. And for good reason: The team had in their hands a 1-1/2-hour video of the Grand Canyon slowly shrinking as the balloon carried the cameras 20 miles into the sky. Patience certainly is a virtue, and sometimes it pays off in a big way. It also helps to get a little lucky.