Local Fishermen Help Scientists Understand the Secrets of a Lake 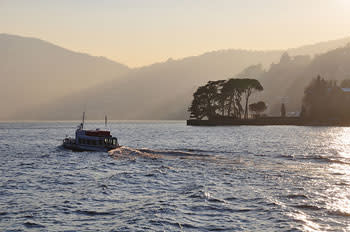 Sometimes, the collective knowledge of generations of locals is just as valuable as a network of high-tech sensors. That's what scientists studying the fluid dynamics of Lake Como in the Italian Alps found, when they began to interview fishermen. The team from the University of Western Australia had been studying the complex currents and temperature gradations in the Y-shaped lake for some time, using a system of floating sensors. Alongside them were the approximately 30 local fisherman who go out each night to string out their giant gill nets, as much as 2,300 feet long and 27 feet high. In the morning, the fishermen retrieve the nets and any fish---mostly shad and whitefish---that have swum into them overnight. 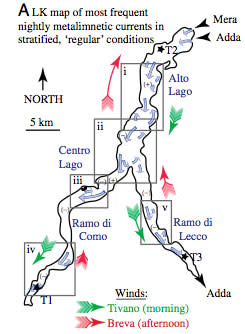 The lake, as described by the fishermen

The team was surprised at first to learn that the fishermen were aware of some the complex phenomena the team had observed. But it made sense: When you are laying out nets that long, it behooves you to know where the currents will have taken them by morning, as well as whether they will be blown into your neighbor's nets by the breeze. The temperatures at various depths in the lake are also worth paying attention to, since they determine where the fish will be. As it turned out, though, the fishermen were also able to tell the team about many features that didn't show up in their data. The scientists learned of gyres in the lake that were relevant to their work, but which tend not to show up unless the sensors are packed close together. To see if they could recreate these flows, they made a mathematical model of the lake. The features the fishermen had described cropped up just where expected. There's a reason most ecological studies don't include interviews with locals---unlike data from sensors, their descriptions are qualitative. It's hard to incorporate "sometimes the wind blows over here and sometimes it blows over there" into mathematical models. But in this situation, where a population of highly skilled individuals spend all of their time observing the natural phenomena in question, it's well worth using their knowledge. BONUS: To see what the fishermen told the scientists, check out this table from the paper: 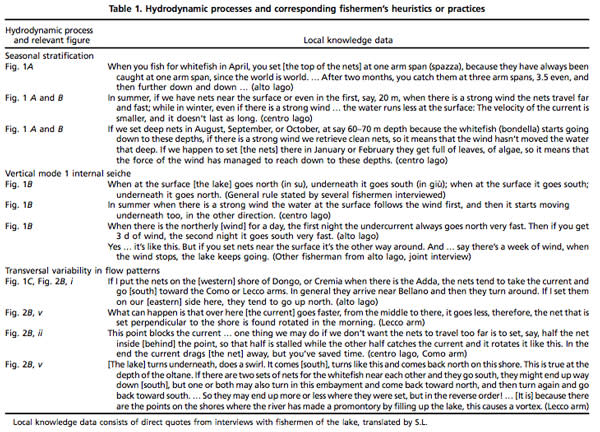